Ever wondered what was at the bottom of the ocean? What types of sea creatures and plants remain hidden? Or what kinds of natural phenomenon still linger out of our reach? Deep sea exploration is becoming more possible with the underwater aircrafts designed by San Francisco, CA-based Hawkes Ocean Technologies. Hawkes’ underwater airplanes have a unique ability for underwater flight. 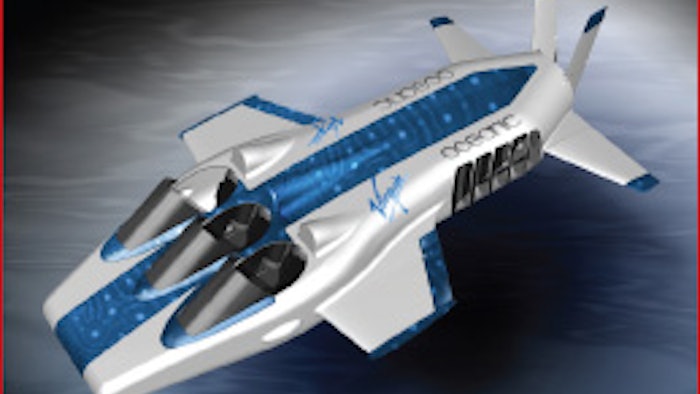 Hawkes Ocean Technologies leads the way for deep sea exploration with its series of winged submersibles that fly through water.

Ever wondered what was at the bottom of the ocean? What types of sea creatures and plants remain hidden? Or what kinds of natural phenomenon still linger out of our reach? Deep sea exploration is becoming more possible with the underwater aircrafts designed by San Francisco, CA-based Hawkes Ocean Technologies (Hawkes).

Hawkes’ underwater airplanes have a unique ability for underwater flight and unprecedented range, speed, and maneuverability, creating a whole new class of manned submersibles that could potentially expand our knowledge on parts of the ocean that have been difficult to reach.

With 70 percent of the Earth’s surface covered by water, Hawkes’ submersibles not only provide access technologies for scientific exploration, but they provide access for recreational purposes as well.

The Principles of Flight

Hawkes was founded by Graham Hawkes, a renowned engineer with more than 40 years of manned submersible design and build experience. He wanted to create a series of submersibles based more on the principles of flight rather than the traditional Cartesian principles of buoyancy.  “A Hawkes submersible acts like an airplane underwater, whereas a conventional one acts more like a balloon or blimp,” explains Adam Wright, principal engineer of Hawkes.

All of the submersibles produced at Hawkes follow the company’s founding principle of positively buoyant machines that operate on the principles of hydrodynamics. “To get under the water, there needs to be a forward thrust, which produces a lift force on the wing section,” says Wright. “It’s very similar to how an airplane takes off, but instead of taking off upward, it takes off downward.” Making the subs positively buoyant produces an inherent safety factor. If the vehicle loses power, it will always come back to the surface, eliminating the risk of sinking.

Hawkes’ subs also have a modular pressure-hull design, which houses the occupants and keeps them safe from the surrounding ocean pressure. “We try to keep a minimum amount of stuff inside the pressure hull to make it as small-volume as possible,” says Wright. “In our minds, there is no reason to put things like batteries or complex electronics in there, because only the pilot, and the systems he needs to operate, needs to be there. “ According to Wright, conventional subs put everything in the pressure hull, which can increase the volume and overall weight of the sub. Minimizing the amount of volume inside the craft helps to decrease the total weight of it, which reflects on the maneuverability and speed.

All designs have a hemispherical view port that surrounds the pilot’s head, allowing for a better visual inspection underwater, whereas conventional deep designs only provide the users with a small window.

According to Wright, the subs are classified based on the depth they can reach in the different zones of the ocean, and designed accordingly. “For up to 5,000 feet, you can use acrylic plastic for your viewports,” says Wright. “Anything that dives deeper, you would want to use glass or quartz.”

Wright continues to explain how shallow-depth submersibles have more organically shaped pressure hulls that form around the pilots, while deeper-depth submersibles require more geometric-shaped hulls because they assist in the ability to combat the ocean’s pressures.

Each of Hawkes’ vessels is powered by a lithium-phosphate battery, similar to the ones that power today’s electrical cars. Hawkes has capitalized on the research performed within the electronic vehicle industry and incorporated it into the design of each sub.

“The main limiting factor of a mission’s duration depends on a person’s bladder,” explains Wright. “Battery wise, there is enough power for a mission to last up to six hours. We also have various designs that allow pilots to easily swap batteries so they don’t have to recharge, much like you would exchange batteries on an electric grill.”

The speed of Hawkes' underwater aircrafts is dependent on the design. An increase in depth results in a much slower sub that cannot maneuver as well. “Our Super Falcon is a faster sub and a more maneuverable one, because it doesn’t have to be weighed down and bulked up by the pressure ability,” says Wright. “Speed wise, the Super Falcon can reach up to 7 knots, which allows pilots to keep up with large marine animals such as dolphins.”

Various camera mounts are available for each sub, depending on what kind of camera the pilot wants to use to capture action. A direct feed doesn’t lead to the hull, so the pilot is unable to see what exactly the camera sees; therefore each camera has to be turned on before the start of each mission. When a mission is complete, the cameras are turned off, and the data is downloaded. “There is the ability to put on third party camera systems, so if there is a specific need to mount a specific camera, we offer that ability,” says Wright.

In the two-man subs, which are the DeepFlight Super Falcon and the DeepFlight Aviator, offered by Hawkes, the pilots are able to freely communicate with each other because they share the same pressure hull. They use a closed-circuit system with an earpiece and microphone to help make it clearer.  “If you are under water, we also have a UQC, which is an underwater communication device that uses low-frequency sound to communicate with the surface. It’s similar to how whales communicate,” says Wright.

The UQC takes the pilot’s voice and codes it into a signal that travels to the surface, which gets coded back into the pilot’s voice. There is a slight delay with the UQC device depending on the depth of the sub.

“We also have various tracking devices. The sub has a pinger that produces an acoustic signal, which is picked up on the surface, and helps figure out which direction the sub is heading,” says Wright. “For the pilot, once they are underwater, it is very hard to track where they are because there is no wireless signal that works through water. If you really want to get an idea where your sub is, you can use a complex piece of equipment called an INS (Inertial Navigation System), which we don’t include on our vehicles because of the cost.” Wright explains that if they included such a device on their vehicles, it would classify them as a weapon, which would make it subject to arms regulations and standards.

All of Hawkes’ submersibles are custom built using Autodesk 3D CAD software, which helps create more efficient and innovative designs. “The software we use is probably the most critical component,” says Wright. “It enables us to work with a very small team due to its ability to communicate ideas between engineers at quick and smooth paces.”

Wright emphasizes the use of the stress analysis from Autodesk. The engineers can create a design and then assign material specifications and test the components in a simulated environment, and it tells the team how the design will function. “With any software, there will always be new features that we will need to learn and incorporate into our designs,” explains Wright. “We are also looking forward to using more of an [Autodesk] Alias approach for our initial prototyping, because it enables us to do more organic shapes than [Autodesk] Inventor.”

According to Wright, one of the main challenges during the design process is getting the components and materials specified to a point where they are effective at high pressures. “You can design things and assign materials to them, but at the end of the day, you aren’t going to know how it operates until you put it in an actual pressure chamber,” explains Wright. “Though, the software we use really mitigates the design challenges during a build.”

Opening up the Ocean

Hawkes main goal Is to open up the ocean; not just to wealthy people, but for everybody, and they are trying to mitigate the price point that exists currently.

The company is also developing a series of unmanned vehicles that can be controlled in real time from the surface. “We have a partnership with a company called Bluefin Robotics in Boston, MA,” says Wright. “We are jointly developing a new type of ROC [remote operated vehicle], which will act like a truck for the ocean that can be configured for various missions.”

Hawkes predicts that manned submersibles will be used primarily for recreational purposes, while exploration will rely solely on unmanned vehicles because of the risk involved at higher pressures. “One thing that our founder likes to say is that Earth is a silly name for our planet, because it’s mostly water,” Wright notes, “not earth.”