Even astronauts — not just the rest of us mere mortals — get mushy talking about Project Mercury's "clean Marine" who led the country's charge into orbit. 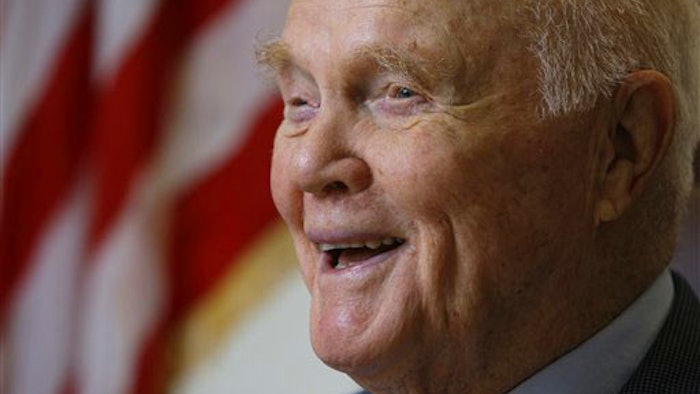 CAPE CANAVERAL, Fla. (AP) — The name still resonates and generates goose bumps like few others in the world of spaceflight.

Even astronauts — not just the rest of us mere mortals — get mushy talking about Project Mercury's "clean Marine" who led the country's charge into orbit.

As the world's most enduring and endearing spaceman gets set to celebrate what no other living astronaut has done — mark the 50th anniversary of his own spaceflight — he finds himself in overdrive reflecting on what has been an undeniably charmed, golden life.

First American to orbit the Earth, aboard Friendship 7 on Feb. 20, 1962. Oldest person to fly in space, at age 77 aboard shuttle Discovery in 1998. U.S. senator for four terms and one-time presidential candidate. Namesake of a NASA center as well as a university's school of public affairs.

Now 90 and living in Columbus, Ohio, Glenn just recently gave up flying and sold his twin-engine Beechcraft Baron. It was tough hopping up on a wing to climb aboard the plane. Glenn and his wife, Annie, who turns 92 on Friday, both had knee replacements last year.

"We decided it was time to pack it in," Glenn said.

With so many blessings and accomplishments, there's still one brass ring Glenn wishes he'd snagged: Apollo 11, the first manned moon landing in 1969. It's a sentiment he's shared often with Neil Armstrong, Ohio's other revered son and the first man to set foot on the moon.

"I've been very fortunate to have a lot of great experiences in my life, and I'm thankful for them. So I don't see myself as being envious. But in his case, I'll make an exception," Glenn said, laughing, during an interview late last month with The Associated Press.

Armstrong, for his part, would like one day to be in Glenn's shoes "and have as much success in longevity." He called the milestone "the most significant of all the space anniversaries."

"And John Glenn deserves all the honors that his country can bestow," the 81-year-old Armstrong wrote in an email. "He is an American patriot."

Five decades later, Glenn reflects with pride on the accomplishments of all seven of NASA's original Mercury astronauts — not just his own.

"It's amazing to me to look back 50 years and think that it's been 50 years," Glenn said, seated in his top-floor office at Ohio State University, inside the school of public affairs that bears his name.

Nearly every day he's asked about spaceflight or NASA, so "it's remained very vivid to me."

Glenn is reluctant to comment on his superstar status. He's as modest and down-to-Earth as ever. He cites attitude and exercise — he tries to walk a couple of miles every day — as key to his active longevity.

He walks and talks like a much younger man — standing straight and tall, and asking questions, not just answering them, in a clear and steady voice. He appears almost as robust as he was for his shuttle ride at age 77.

The only other surviving Mercury astronaut, Scott Carpenter, ranks Glenn as tops among the hand-picked military test pilots presented in 1959 as the Mercury Seven.

Fifty years ago on Monday, Glenn circled Earth three times in five hours, putting America on even footing with the Soviet Union. The Soviets already had laid claim to the world's first manmade satellite, Sputnik, and the first spaceman, Yuri Gagarin, who had orbited the globe a year earlier. Gagarin logged a full revolution; the next cosmonaut to fly spent an entire day in orbit.

Unlike the secretive Soviet space program, NASA conducted its manned launches on live TV.Finally, it was America's turn to shine. But it was a nail-biter.

First, a thruster malfunctioned in orbit. Glenn had to take manual control. Then there were signs that the protective heat shield on his capsule was loose.

No one, Glenn included, knew whether he would survive the fiery re-entry. The shield proved to be tight, and Glenn returned a national hero on the scale of Charles Lindbergh.

Just outside Glenn's office at Ohio State is the hand controller he used to fly the Friendship 7 capsule. The display box also holds the small failed thruster.

The artifacts are among more than 1,000 boxloads of materials he gave Ohio State for safekeeping and display, with more to come. The items span his entire life, from his small-town Ohio boyhood to his ace-flying days of World War II and Korea, to NASA to Democratic U.S. senator for his home state for 24 years, to his brief bid for president in 1984.

The capsule itself and Glenn's silver spacesuit are at the Smithsonian Institution's National Air and Space Museum.

Glenn hasn't auctioned any of his memorabilia, unlike some space pioneers who have found themselves in legal tussles with NASA. "I have never sold a single thing. Nor will I," Glenn said firmly.

His hope is that the mementos drum up interest among schoolchildren in space, science and technology.

A collectible from that first flight inspired astronaut Donald Pettit, 56, now a resident of the International Space Station. He recalls getting a pair of Red Ball Jets sneakers as a boy growing up in Oregon, and inside the box was a 45-rpm record of Glenn describing his orbital flight. The recording blew Pettit away, as did the photos of the pioneering astronauts that appeared in Life magazine. (Life held exclusive rights to the stories of the original Mercury Seven astronauts.)

From that moment on, Pettit was captivated with space, as were so many of his Cold War-born generation.

All told, 330 Americans have followed Glenn into orbit.

Glenn was actually the third American — and the fifth person — to rocket into space. Alan Shepard and Gus Grissom were confined to 15-minute suborbital hops in 1961, the same year the two Soviet cosmonauts blazed trails into orbit.

America was badly behind. Unmanned U.S. rockets kept exploding on the launch pads.

"Rocket performance was far from predictable," Armstrong noted in his email.

The stakes couldn't have been higher when it came time for Glenn to soar. And fears abounded as to whether a man could survive weightlessness: Would his vision be impaired to the point he couldn't land his vessel? Could he swallow food? Might he become so elated with space that he might never wish to return to Earth?

Glenn often is asked whether he was afraid.

"Are you apprehensive about the situation you're in? Yeah, but you volunteered, you want to do this thing, it's important for the country, and you're glad to have been selected for it, and you're going to do the best job you can possibly do."

Ten times Glenn's launch was delayed. Finally, on the morning of Feb. 20, 1962, Carpenter called out from the blockhouse, "Godspeed John Glenn" moments before the Mercury-Atlas rocket ignited.

Glenn did not hear Carpenter's poetic send-off until after the flight.

"That meant a lot, and it's meant a lot since then," Glenn said. "It just showed we were all working together at that time."

The words came to Carpenter at that moment. It's become one of the most memorable quotes from spaceflight.

What Glenn needed was "simply speed, and it occurred to me that you could ask the higher power for the speed," Carpenter said earlier this month from his winter home in South Florida.

"It was an appropriate bon voyage, a prayer, goodbye and good luck all wrapped up with a concise statement, I think," Carpenter said.

He will join John and Annie Glenn, and their children, semiretired Dr. David Glenn, and artist Lyn Glenn, in anniversary celebrations at Kennedy Space Center on Friday and Saturday. Married for 68 years, the Glenns are virtually inseparable. They met in the playpen as toddlers in New Concord, Ohio.

More than 100 retirees who worked on Project Mercury also will gather for a reunion this weekend at Cape Canaveral. On Monday, the actual anniversary, the Glenns will attend an Ohio State gala.

"We were very competitive and we worked very, very hard," Glenn recalled. "But once somebody had been selected for a flight, you never saw a group get together any tighter than that group to support that flight, and that's just the way it was. That happened that way on every single flight."

They believed strongly in what they were doing, Glenn said.

Once Americans achieved orbit and caught up with the Soviets, "I think people really felt that we really were on the way back, sort of a turning point, I think, in our national psyche," Glenn said.

So it's distressing for Glenn that 50 years after his first spaceflight, America no longer has its own means of getting astronauts to orbit.

Glenn still rues the day in 2004, one year after the Columbia disaster, that President George W. Bush announced the space shuttle program would end in 2010, to be followed by a moon base and eventual Mars expeditions. The lunar idea was shelved by President Barack Obama, and asteroids are the newest targets of opportunity.

In the months leading up to the final shuttle flight last July, Glenn tried, in vain, to persuade Obama to keep the ships flying until a replacement rocket became available.

"It's unseemly to me that here we are supposedly the world's greatest spacefaring nation and we don't even have a way to get back and forth to our own International Space Station," he said.

NASA remains dependent on Russia until U.S. private industry is able to take astronauts to the space station — an estimated five years away.

"The leaders of tomorrow are on the campuses of today," Glenn likes to say about the John Glenn School of Public Affairs. When reminded that the astronauts of tomorrow are, too, he noted: "If we can just get something for them to ride."