The intercontinental ballistic missile was launched from California early Wednesday on a test flight to a target in the Pacific Ocean. 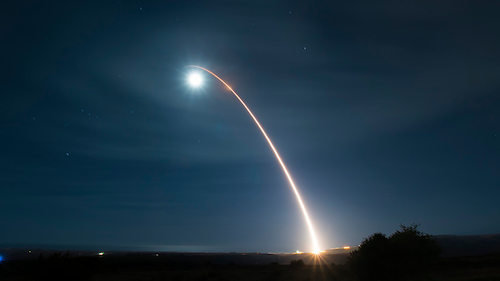 VANDENBERG AIR FORCE BASE, Calif. (AP) — An unarmed Minuteman 3 intercontinental ballistic missile was launched from California early Wednesday on a test flight to a target in the Pacific Ocean, the Air Force Global Strike Command said.

The missile blasted off at 12:33 a.m. from Vandenberg Air Force Base and its reentry vehicle traveled 4,200 miles (6,759 kilometers) to the Kwajalein Atoll in the Marshall Islands as part of a developmental test, the command said from Barksdale Air Force Base, Louisiana.

Developmental tests use a spare missile from storage to validate flight worthiness of new or replacement components. That differs from test launches that use randomly selected operational missiles.

The Air Force said test launches are not a reaction to world events. The launch calendars are developed three to five years in advance, and planning for individual launches takes six months to a year.

Huawei is at the center of tensions with Washington over China's technology ambitions and possible spying.
Joe McDonald
Mar 31st, 2020

Americans have been slow to embrace virtual care, but that may be changing.
Tom Murphy
Mar 24th, 2020

The company may be seeking to make its tablet even more like a laptop computer.
Associated Press
Mar 18th, 2020

This Laser Pointer Can Melt Glass

Vaccine Firm Denies US Tried to Acquire It

The statement came in response to reports that Donald Trump was offering the German firm a large amount to secure its work for the U.S.
Associated Press
Mar 16th, 2020