Some near-earth asteroids could be worth billions. Now we just have to get there and back - safely and cost-effectively. 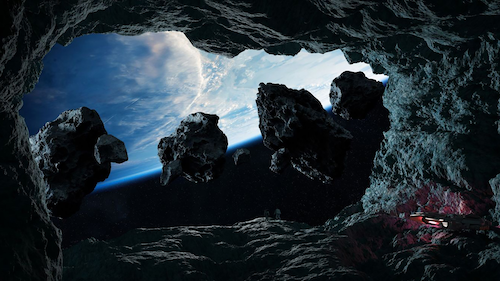 This may sound like science fiction, but since at least the 1970s, organisations like NASA have been considering the possible advantages of asteroid mining for resources. Now, in the midst of a new privatized space race and a global rare metal shortage, companies are revisiting the possibility of sourcing materials from outer space. A single asteroid could contain trillions of dollars’ worth of precious metals, and sourcing materials from asteroids could enable large-scale construction in space.

The world demand for rare and precious metals is growing, and a mix of political turmoil and natural scarcity are contributing to fears that the global supply will be unable to keep up. As supplies dwindle, demand grows, and prices rise, the new private company-based space race might offer a solution to the shortage.

Asteroid mining would require major investments in new technologies, but there has been enough interest that companies have been formed to prospect for asteroids to harvest. Asteroids can be grouped broadly into those that are primarily carbonaceous, silicates, or metallic. Metallic asteroids are primarily iron and nickel, but can contain rare metals like platinum, gold, iridium, palladium, osmium, ruthenium and rhodium at concentration several times higher than what is found on Earth.

A single asteroid could be worth hundreds of millions of dollars, or more, if humans could overcome the formidable challenge of harvesting it.

Mine in Space to Build in Space

Bringing rare metals to Earth is not the only possible use for asteroid-derived materials. Building equipment on Earth then lifting it into space is, in fact, expensive. Every ounce of material costs money to lift into orbit, and individual space launches cost upwards of $100 million. So, even the more common materials in asteroids take on new value because they are already in outer space.

Other materials without an obvious structural purpose, such as water, could be used as raw materials for fuel synthesis and/or life-sustaining supplies. If the materials found in asteroids could be processed into a useable form in space, it would remove a major barrier to large-scale construction and exploration.

Harvesting an asteroid sounds exciting. Yet the reality is that, so far, humans have barely harvested a few dust particles from actual asteroids. Much of the in-depth information we have on the composition of asteroids is from the characterization of meteorites that have fallen to Earth. So how could we possibly know which asteroids are worth mining?

The vast majority of measurements of the composition of asteroids in outer space have been accomplished using infrared spectroscopy via telescopes. Asteroids with different compositions absorb different frequencies in the infrared spectrum, allowing scientists to determine what they are made of based on the light they reflect.

More recently, radar-based techniques have also been deployed to distinguish different types of an asteroid. Such estimates are often calibrated against samples of meteorites found on Earth. The relatively high abundance of rare metals in asteroids allows them to be ranked according to their approximate value and difficulty to harvest.

A 2012 feasibility study at the California Institute of Technology (CalTech) in Pasadena argues that the most attainable first mining project would consist of bringing an NEA (near-earth asteroid) into high-lunar orbit, and making it accessible for surveying and extraction. They estimated that it would be feasible to redirect an asteroid approximately seven meters across to orbit the moon by 2025. However, the same study estimates the cost of the mission to be at least $2.6 billion.

Bringing an asteroid close enough to Earth to extract valuable materials depends on more than just the distance and size of the asteroid. One of the most important factors is the change in the asteroid’s velocity, or “delta V”, which would be required to alter the asteroid’s trajectory to one that would put it in orbit around Earth or the moon. The amount of fuel required to push the asteroid would depend on both the asteroid’s mass and delta V.

Other factors, like the asteroid’s spin and whether or not it is travelling in an asteroid pair, also factor into the difficulty of re-directing the asteroid to a location for harvesting. Thus, any given asteroid’s trajectory, mass, spin and more must be taken into account when planning a retrieval operation. Additionally, any missions must also be timed to take advantage of periods when the asteroid is already moving closer to the Earth.

How Close Are We?

In order to understand how much additional research and effort may be required to make harvesting asteroids a reality, we should take a look at the history of human efforts to retrieve materials from space for scientific study. By far the largest amounts of samples ever recovered from outer space were achieved during the race to the moon between the U.S. and USSR during the 1960s and 1970s. NASA retrieved a total of 382 kg of material from the Apollo missions between 1969 and 1972.

Automated “Luna” spacecraft sent by the USSR also brought back about 300 g worth of samples. It took another 30 years before any other serious efforts to retrieve material from space were attempted.

NASA’s Stardust spacecraft passed near comet Wild-2 in 2004 and used an aerogel-based sample collector to capture dust from the comet. Due to its extremely high porosity, the aerogel made ideal material for slowing down and trapping the very high-velocity dust particles without destroying them. The dust was successfully returned to Earth and produced some valuable discoveries, but grabbing a few tiny micron-sized particles is a long way from industrial-scale mining.

The Japan Aerospace Exploration Agency (JAXA) has executed the most successful missions to retrieve material from asteroids so far. While the Hayabusa 1 mission to 25143 Itokawa asteroid encountered difficulties and was only able to return with some dust particles, the Hayabusa 2 mission is currently underway to explore and sample the NEA, 162173 Ryugu.

The probe was launched carrying three small rovers, a landing module, and equipment for taking surface samples. It has already completed two sampling runs, where it blasted the asteroid with a tantalum projectile then collected the flying debris. Hayabusa 2 is expected to return home in December of 2020 and the samples it carries will be the largest payload of samples retrieved from a near-Earth body since the Apollo missions.

NASA also has ongoing missions to take samples from NEAs. The OSIRIS-REx probe is currently orbiting an NEA, Bennu, where it will map the surface and retrieve samples. This operation will be a precise maneuver whereby the probe approaches Bennu on a trajectory that matches the asteroid’s spin, touches the surface with a sample collector for about five seconds, and uses a jet of nitrogen to flush loose dust and pebbles into traps in the collector. Ryugu has an estimated value of more than $80 billion, while Bennu is with about $670 million.

However, they would cost about $50 billion and $485 million to harvest. After these missions are concluded, we will have more detailed information about their compositions than ever before, and we will see whether they are as rich in precious metals as speculators hope. The biggest step towards converting asteroids into a harvestable resource may be the upcoming “Double Asteroid Redirection Test” or DART.

Scheduled to launch in 2021, the DART mission will involve the asteroid pair 65803 Didymos. The DART vehicle will launch a tiny observer satellite, then it will accelerate towards one of the 65803 Didymos asteroids while taking pictures, then collide with the asteroid. Observations from Earth-based telescopes and the microsatellite will monitor the change in the asteroid’s trajectory relative to its twin. This could be the first step towards redirecting asteroids that pose a threat to Earth or towards moving an asteroid into a convenient position for mining.

So, will the world economy soon be flooded by a vast new supply of previously-scarce precious metals? Probably not. At present, no company is quite ready to risk billions of dollars on a venture that requires technologies which have not been fully developed and techniques that are not proven.

The nearest thing humans have accomplished so far is scraping a few tiny samples off of an asteroid’s surface, and even those missions were very risky and challenging. However, asteroid mining might still have a future.

Global demand for technologically-critical metals is still growing. In the meantime, new NEAs are constantly being discovered, and so is our ability to detect valuable metals in those asteroids. If these trends continue, it may only be a matter of time until an asteroid with enough precious metals passes near the Earth and someone decides it’s worth the risk to try to catch it.

Designed with shooter accuracy in mind, the SMASH system can engage both stationary and moving targets during the day or at night.
Alex Shanahan
Jeff Reinke
Feb 12th, 2020

The mound measures ground forces generated during each part of a pitch, from wind-up to follow-through.
Pat Eaton-Robb
Feb 11th, 2020

The Trump administration has accelerated efforts to warn other countries to be wary of Chinese investment and influence.
Eric Tucker
Feb 7th, 2020