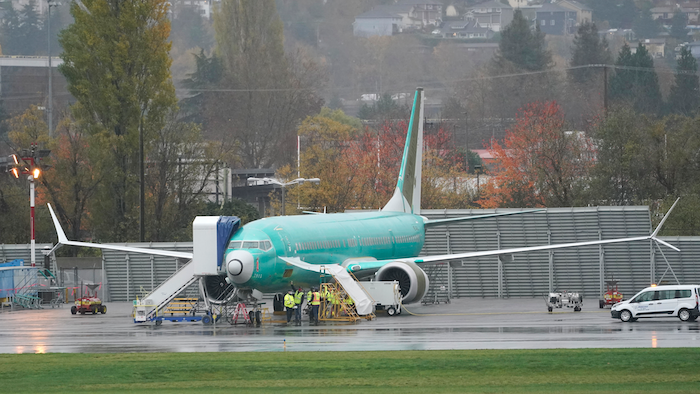 In this Nov. 18, 2020 photo, workers stand near a Boeing 737 Max airplane parked at Renton Municipal Airport next to the Boeing assembly facility in Renton, WA, where 737 Max airplanes are made.
AP Photo/Ted S. Warren

Boeing Co. got a bump in orders and deliveries of new planes in December, but it wasn't enough to salvage a poor year for the big aircraft maker.

Chicago-based Boeing still reported more cancellations than new orders for its 737 Max jet, which was grounded for 21 months after crashes in Indonesia and Ethiopia killed 346 people.

The market for new planes remains depressed by the pandemic, which has devastated air travel and caused airlines to reconsider aircraft purchases. Despite the December numbers, Boeing’s full-year numbers for 2020 still declined from 2019.

Boeing finished 2020 with 157 deliveries, including planes handed over to cargo airlines and military customers. That was down from 380 deliveries in 2019. European rival Airbus finished the year with 566 deliveries.

Deliveries are crucial because aircraft makers get much of their cash when planes are delivered. Short on cash during the Max grounding, Boeing has borrowed billions and cut thousands of jobs to reduce costs.

The Federal Aviation Administration's decision in November to approve changes to a flight-control system on the Max allowed Boeing to resume shipping previously built Maxes to airline customers. Boeing delivered 39 planes in December, including 28 Maxes, of which 10 went to American Airlines and eight to United Airlines.

However, Boeing also reported canceled orders for 105 Max planes, all but five by leasing companies that fear it will be difficult to find operators to take the planes.

The totals don't include Alaska Airlines' decision to buy 23 more Max jets. That deal was announced last month but will be reported with January orders, a Boeing spokesman said.

Boeing said it has a backlog of nearly 3,300 unfilled orders for the Max and about 4,200 for all planes, including cargo freighters.

Which is a big problem for COVID-19 vaccination.
Jan 5th, 2021
Follow Us
Most Recent