It's the fourth straight month of growth. 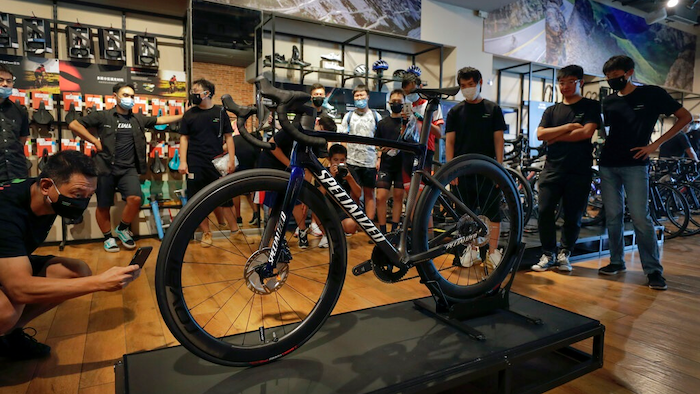 Customers wearing face masks to help curb the spread of the coronavirus look at a newly unveiled new model from the American bicycle brand at a retailed shop in Beijing on July 29, 2020. China's trade growth accelerated in September as the world's second-largest economy recovered form the coronavirus pandemic.
AP Photo/Andy Wong

BEIJING (AP) — China’s trade picked up in September as global demand for masks and medical supplies boosted exports and the economy's early reopening gave producers an edge over foreign competitors.

Exports rose 9.9% over a year earlier to $239.8 billion, up from August’s 9.5%, the fourth straight month of growth, customs data showed Tuesday. Imports gained 13.2% to $202.8 billion, up from the previous month’s 2.1% contraction as the world's second-largest economy regained momentum.

Exports had a “comprehensive recovery” in the three months ending in September, said a spokesman for the customs agency, Li Kuiwen. He said China has exported masks and other medical supplies worth 1 trillion yuan ($150 billion).

Chinese exporters have benefited from relative early end of travel and trade curbs after the ruling Communist Party declared victory over the outbreak in March. They are taking market share from foreign competitors that are hampered by anti-disease controls.

“Renewed virus outbreaks in trading partners will be a challenge, but shipments of products benefiting from virus-related demand should continue to hold up,” Louis Kuijs of Oxford Economics said in a report.

China’s global trade surplus swelled 6.6% over a year earlier to $37 billion but was down sharply from August’s $58.9 billion gap, thanks to higher exports.

Exports to the United States rose 20.5% over a year ago to $44 billion despite higher U.S. tariffs in a fight with the Trump administration over Beijing’s technology ambitions and trade surplus. Imports of American goods rose 24.5% to $13.2 billion.

China became the first major economy to rebound to pre-virus growth levels in the second quarter of the year, when the government reported 3.2% economic growth over a year earlier. Forecasters expect that to accelerate in the three months that ended in September.

Automakers and other large manufacturers are back to normal activity, helping to drive demand for imported iron ore, copper and other industrial materials.

Importers are meanwhile benefitting from a slump in prices of oil and other commodities due to weak demand.

Retail sales remain subdued as consumers who are uneasy about possible job losses put off major purchases. Consumer spending returned to pre-virus levels in August but was only 0.5% above a year earlier.

Economists have warned some Chinese exporters of smartphones and other high-tech goods might face trouble due to restrictions imposed by Washington on their access to U.S. components on security grounds.

Washington has cut off supplies of components for companies including China’s most prominent tech brand, Huawei Technologies Ltd.

The Trump administration is lobbying European and other allies to avoid Chinese suppliers as they upgrade to next-generation telecom networks. That could weigh on exports of technology products Beijing is promoting to propel economic development.