Companies Find Getting Back to Work Easier Said than Done

As officials tussle over how to “reopen” the U.S. economy, some corporations are taking the first steps. 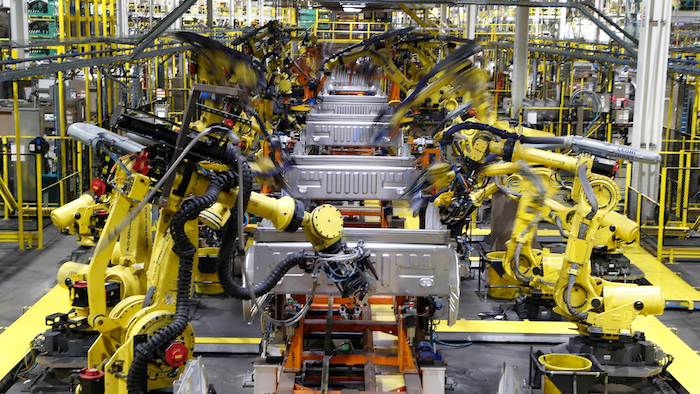 In this Sept. 27, 2018 file photo, robots weld the bed of a 2018 Ford F-150 truck on the assembly line at the Ford Rouge assembly plant in Dearborn, MI. US businesses are edging their way toward figuring out how to bring their employees back to work amid the coronavirus pandemic, some more gracefully than others. Detroit-area automakers, which suspended production in March, are now pushing to restart factories as soon as possible.
AP Photo/Carlos Osorio, File

NEW YORK (AP) — As state and federal leaders tussle over when and how fast to “reopen” the U.S. economy amid the coronavirus pandemic, some corporations are taking the first steps toward bringing their employees back to work. Which in many cases is easier said than done.

Detroit-area automakers, which suspended production roughly a month ago, are pushing to restart factories as states like Michigan prepare to relax their stay-at-home orders. Fiat Chrysler has already announced a May 4 gradual restart date; General Motors and Ford don't want to be left behind.

In negotiations with the United Auto Workers union, automakers are offering to provide protective gear, frequently sanitize equipment, and to take worker temperatures to prevent anyone with a fever from entering factories. These steps, they say, have worked at repurposed factories now making medical equipment.

Matt Himes, who installs SUV doors at a GM plant in Spring Hill, Tennessee, said he’s ready to get back to work. But he also fears catching the virus.

“I guess we all should worry about it, but you can’t keep us closed down forever,” said Himes, who added that it’s impossible to keep social distance on his assembly line. “You work within 3 or 4 feet from everybody,” he said. “People right across from you, people right beside you.”

Health officials fear that such moves, if not carefully planned, could fuel a second wave of COVID-19 infections. Some companies that never closed offer a cautionary tale: Meat-packing plants across the Midwest have reported hundreds of coronavirus cases among their tightly quartered workforces. Several have shuttered in an attempt to stem the spread.

Above all else, executives will need to be flexible, said Nicholas Bloom, an economics professor at Stanford University. “You can have a set of plans, but those plans are going to have to be updated on a rolling basis,” he said. “The forecast is incredibly uncertain.”

Retailers, restaurants and mall operators are looking at China’s experience to see how they can reopen stores, said Meghann Martindale, global head of research at CBRE, a real estate services firm. Malls, for instance, probably won’t open food courts and big play areas for children for a while, and shopping complexes will likely limit the number of entrances to control the flow of customers.

Build-A-Bear Workshop, which operates 350 mostly mall-based stores in the U.S., is exploring new ways to ease coronavirus fears, such as letting families make appointments so they can customize and stuff their own plush toys without strangers around, said founder and former CEO Maxine Clark. It’s also giving its workers masks that feature bears so they won’t be scary for children.

Amazon, which drew sharp criticism for firing an employee who led a walkout to demand greater coronavirus protection for workers, now says it is developing an internal lab that could potentially provide coronavirus tests for all employees, even those without symptoms. “We think it’s worth trying, and we stand ready to share anything we learn,” CEO Jeff Bezos wrote in a recent letter to shareholders.

Many technology companies embraced stay-at-home policies early on, since most of their workers can do their jobs remotely. That gives Facebook the luxury of requiring the vast majority of its employees to continue working from home through at least the end of May. Those who can’t easily return after that — if, say, they have no good childcare options — can continue to work remotely at least through the summer.

But some high-tech firms are in a bigger hurry. Andrei Taraschuk, a software engineer who works for the chip maker Broadcom in Broomfield, Colorado, said employees learned at a town hall meeting Friday that they would be required to go into the office one week out of every four starting April 27.

According to Taraschuk, the company told workers they would be randomly assigned to new groups, not their existing teams, and that their attendance would be monitored via badge checks. The company would give them face masks, gloves and temperature checks. Those who refused to come in would have the option of not working for up to 90 days without pay.

“We’ve been working from home for weeks,” Taraschuk told The Associated Press in an interview. “It’s bizarre. We write software.”

Broadcom did not reply to a detailed request for comment.