Exports to the United States fell 20.8% from last year. 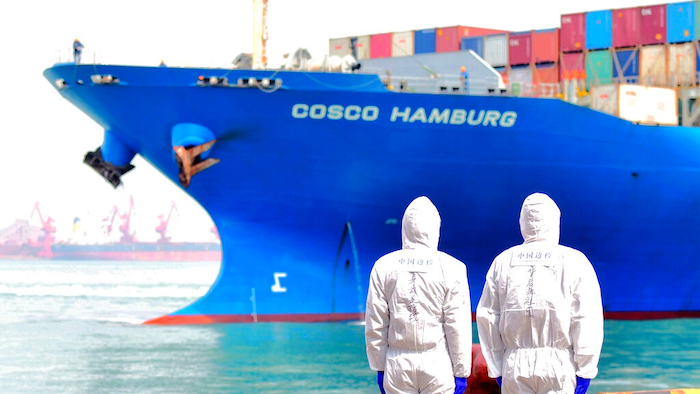 In this March 31, 2020 photo, workers in protective suits stand near a COSCO container ship docked at a port in Qingdao in eastern China's Shandong Province. China's government reported Tuesday, April 14, 2020 that exports fell further in March compared with February amid a global economic slowdown caused by the coronavirus pandemic.
Chinatopix via AP

BEIJING (AP) — China’s exports fell in March but at slower pace than the 17% contraction seen in January-February as the coronavirus shutdown paralyzed much business activity.

Exports to the United States fell 20.8% from last year to $25.2 billion while imports of American goods declined 12.6% to $9.9 billion. China’s politically sensitive trade surplus with the United States was $15.3 billion, accounting for three-quarters of its global surplus of $19.9 billion.

The ruling Communist Party is trying to revive Chinese industries, but their key export markets in the United States and Europe have closed stores and told shoppers to stay home.

“The recovery in exports is likely to be short-lived,” Julian Evans-Pritchard of Capital Economics said in a report. “Foreign demand will slump this quarter as COVID-19 weighs on economic activity outside of China.”

Trade was poised for a boost after Beijing and Washington removed punitive tariffs on some of each other’s goods in a truce signed in January. But that was offset by Chinese anti-virus controls that shut down much of the world’s second-largest economy in late January.

The ruling Communist Party is trying to revive industry after declaring victory over the virus that emerged in central China in December. Factories, shopping malls, restaurants and office buildings have reopened, but anti-disease controls including fever checks still are in place.

Measured by volume, Chinese imports rose more than the financial figures indicated due to declining prices for oil and other commodities.

Li did not say what share of the total was from the United States. Soybeans are the biggest U.S. export to China. Beijing temporarily suspended purchases due to their tariff war but resumed them late last year.

Chinese imports usually surge after the Lunar New Year holiday as factories restock after shutting down for two weeks or longer.

This year’s rebound was postponed since the holiday was extended by at least one week — more in some places — to keep factories and offices closed as authorities tried to contain the spread of the coronavirus.

Until the virus outbreak, Chinese trade had been unexpectedly resilient despite Beijing’s tariff war with President Donald Trump over its technology ambitions and trade surplus. Last year’s exports rose 0.5% over 2018.

China told exporters to pursue other markets in Asia, Europe and Africa after Trump slapped punitive duties on their goods starting in 2018. Beijing retaliated by raising tariffs on American soybeans and other goods.

Some of those penalties were rolled back after the two sides signed a “Phase 1” agreement in January. Washington canceled additional planned tariff hikes and Beijing promised to buy more American farm exports.