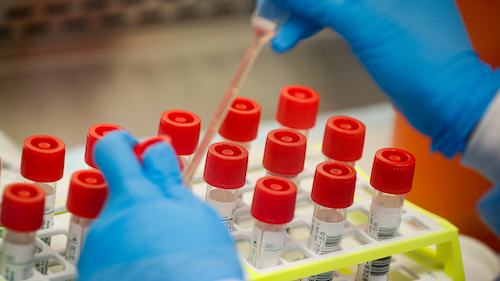 In this March 11 photo, a technician prepares COVID-19 coronavirus patient samples for testing at a laboratory in New York's Long Island. Wide-scale testing is a critical part of tracking and containing infectious diseases. But the U.S. effort has been plagued by a series of missteps, including accuracy problems with the test kits the CDC sent to other labs and bureaucratic hurdles that slowed the entrance of large, private sector labs.
AP Photo/John Minchillo

WASHINGTON (AP) — First, some of the coronavirus tests didn't work. Then there weren't enough to go around. Now, just as the federal government tries to ramp up nationwide screening, laboratory workers are warning of a new roadblock: dire shortages of testing supplies.

The shortages are the latest stumble in a botched effort to track the spread of coronavirus that has left the U.S. weeks behind many other developed countries. Dwindling supplies include both chemical components and basic swabs needed to collect patient samples.

There are "acute, serious shortages across the board" for supplies needed to do the tests, said Eric Blank, of the Association of Public Health Laboratories, which represents state and local health labs.

Blank said government labs in the U.S. are competing for supplies with larger commercial labs and governments around the world. In conference calls this week with the Centers for Disease Control and Prevention, some lab staff warned that they may have to shut down testing within days due to lack of components, Blank said.

Wide scale testing is a critical part of tracking and containing infectious diseases like COVID-19. But the U.S. effort has been plagued by a series of missteps, including accuracy problems with tests the CDC sent to other labs and bureaucratic hurdles that slowed the entrance of large, private sector labs.

With the virus spreading, officials in the U.S. have shifted focus from tracking the virus to extraordinary measures to blunt its damage. On Thursday California's governor told its 40 million residents to stay home indefinitely and venture outside only for essential jobs.

But public health experts stress that policymakers are “flying blind” in deciding how to manage the pandemic.

“The only way to get through it without testing is to keep the entire country quarantined for the next 18 months” said Dr. Ashish Jha, a Harvard University global health professor. “That obviously is untenable.”

Jha and his colleagues say the U.S. should be screening 100,000 to 150,000 people per day. The current rate is roughly 20,000 per day, he estimates, though it is accelerating as larger commercial companies ramp up testing.

The director of Missouri's state lab said Friday that his facility is facing shortages of swabs, liquids to store patient samples and kits to develop the results. Many labs are having similar problems, said Bill Whitmar.

“Quite frankly, 95% to 98% of the talk between lab directors has been about the shortage of supplies,” Whitmar said.

At this point only 500 swabs are available. And the lab only has supplies to last through Tuesday, he reported.

The Jefferson City lab does only a fraction of the coronavirus testing performed in Missouri, with commercial labs now doing the largest share. But Whitmar’s lab is where tests are run on the people most likely to be infected in that state.

The shortages have become a central concern in increasingly urgent communications among governors and federal officials.

“Most of my phone calls today have been about swabs,” Gov. Gina Raimondo said during a Tuesday news conference. “That’s our big issue at the moment.”

The Trump administration's top health official suggested Friday that the “anecdotal” reports of shortages are caused by confusion about how to find alternative supplies.

“Usually it’s that the lab people do not understand that there are alternative supplies in the marketplace that they are perfectly free to use,” Azar told reporters in a briefing at the White House. He said the federal government is purchasing and shipping swabs to states.

Whitmar, the Missouri lab director, said many suppliers just don't have the products in stock.

The coronavirus test uses a chemical chain reaction to detect tiny traces of the virus' genetic material and reproduce it many times. State and local health labs follow the technique first developed by the CDC, which calls for a specific genetic kit made by German diagnostic firm Qiagen. Labs around the globe are reporting shortage of those kits.

Qiagen said this week it is trying to boost production from normal levels, which are capable of testing 1.5 million patients per month, to amounts that would allow for testing more than 10 million patients by the end of June.

The World Health Organization has instructed countries to “test, test, test” to track and isolate those carrying the virus. But the evolving message from U.S. decision-makers acknowledges that many suspected cases will likely go untested.

The White House has increasingly emphasized that testing should prioritize the elderly and health care workers who have symptoms of the virus. While most cases of COVID-19 are mild and tens of thousands of people have recovered, older people and those with underlying health problems are at higher risk for more serious problems, such as pneumonia.

“We don’t want everyone to go out and get a test because there’s no reason for it," President Donald Trump told reporters in a briefing Friday. (Two weeks ago, Trump declared “anybody who wants a test can get a test.” But his deputies later walked back that statement.)

The CDC tells people to seek testing if they have certain symptoms of the flu-like illness caused by the coronavirus – fever, cough and trouble breathing – and if they have traveled recently to an outbreak area or have been in close contact with someone who is infected. They should first be tested for the flu and other routine infections.

While doctors are supposed to decide who ultimately gets tested, many state labs have adjusted their guidelines depending on testing availability.

The Trump administration is expected to soon announce the rollout of nearly 50 community-based testing centers around the country, including drive-thru sites.

Some experts worry the introduction of convenient, mass screening will divert supplies from people with severe symptoms to those who face lower risks.

“It’s taking supplies that are already in very short supply away from the testing laboratories that are doing necessary testing,” said Blank, of the public health labs association.