Besides Chinese-based firms, transnational companies in North America, Europe and elsewhere are also reporting damage from the virus' fallout. 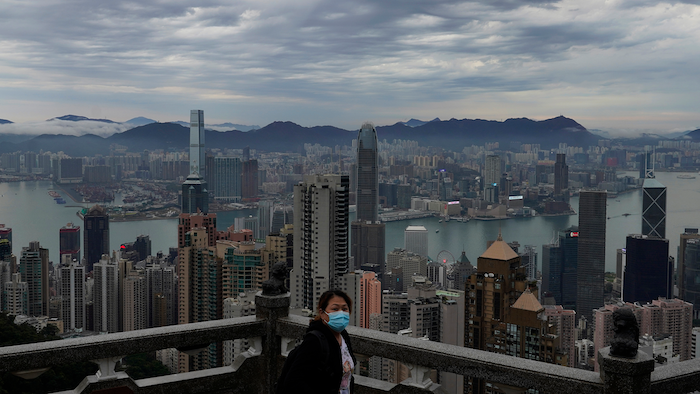 A woman wears protective face mask at the Peak, a popular tourist spot in Hong Kong on Thursday, Feb. 13. COVID-19 viral illness has sickened tens of thousands of people in China since December.
AP Photo/Vincent Yu

NEW YORK (AP) — The economic toll of China's viral outbreak continues to mount for corporations based in and outside of the country as factories are shuttered and consumer behavior is altered measurably.

On Thursday Alibaba, the first major Chinese company to report quarterly earnings since the emergence of the coronavirus, said the outbreak “is having significant impact on China's economy ... potentially affecting the global economy.”

CEO Daniel Yong Zhang said the overall revenue growth rate at Alibaba will be negatively affected this quarter, which ends in March. Some of its businesses may have negative revenue growth.

The outbreak might spur adoption of long term consumer behavioral changes, like working remotely and ordering online, particularly in less developed parts of China, Zhang said. That's what happened in 2003 after the SARS epidemic, he said.

Alibaba is the equivalent in China of Amazon.com, only bigger. Despite supply chain problems that are affecting almost every global corporation that operates in the country, Alibaba is in a unique position to help people during the crisis and in some ways, benefit.

“So people now work remotely from home. People buy foods, buy fresh products, buy groceries, buy necessities from home,” said Zhang. "I think this is a – this is a very big challenge that – the crisis is a very, very big challenge to the society, but also as I said in my remarks, give people a chance to try a new way of living and new way of work."

Yet whatever benefit Alibaba sees, there are clear risks for the company.

While orders for food and other necessities are rising with people unwilling to leave their homes, sales of other goods, like electronics and clothing, are deteriorating, the company said Thursday.

There is “reduced willingness on the part of consumers to make those kinds of purchases at the height of the epidemic,” Zhang said.

Ralph Lauren, the luxury clothing and apparel maker in New York, warned Thursday that the virus will cut into fourth-quarter sales by an estimated $55 million to $70 million. One of six factories operated by PepsiCo in China has not re-opened. Hilton has closed 150 hotels there.

Two-thirds of the stores owned by Ralph Lauren in China have been closed over the past week and the company said that supply chain disruptions could affect customers outside of China.

Hilton Worldwide Holdings Inc. said Wednesday that it expects a $25 million to $50 million hit to annual earnings, but that is presuming a three- to six-month outbreak and a three- to six-month recovery period. The company based its forecast, in part, on past experience with viral outbreaks like SARS.

Those combating the outbreak will not give any estimates regarding its duration.

“'I can’t stress enough that this is really preliminary, that this is a sort of evolving situation,” Hilton CEO Chris Nassetta told investors in a conference call.

PepsiCo said Thursday that its factory in Wuhan, the epicenter of the outbreak, remains closed, though its five other factories re-opened after the Lunar New Year holiday.

The virus is not expected to have a material impact on profits, Pepsi said. In the fourth quarter, Pepsi's China, Australia and Asia Pacific unit made up 4% of total revenue. North America accounts for 59%.

But the company's guidance for 2020 organic revenue growth of 4% was on the low end of previous forecasts.

"The world is certainly a volatile place,"' PepsiCo Chief Financial Officer Hugh Johnston said in a conference call with investors.

The death toll from the virus in China reached 1,380 by the end of Thursday, with confirmed cases climbing to 63,851.

Shares of all three companies slid Thursday despite a strong economic performance from each of them in the most recent quarter.