New U.S. tariffs are set to kick in on many Chinese-made products, including laptops and smartphones, as of Dec. 15. A preliminary deal could avert that. 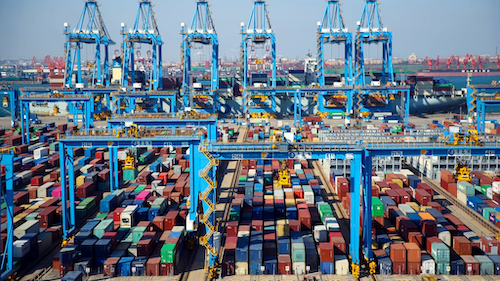 In this Thursday, Nov. 28, 2019, photo, trucks load containers at the automated container dockyard in Qingdao in east China's Shandong province. A Chinese official newspaper has reiterated, repeatedly, Beijing's demand that the U.S. roll back tariffs imposed by President Donald Trump's administration in exchange for a deal. The Communist Party newspaper Global Times ran several articles Monday, Dec. 2, 2019 that emphasized there would be no deal without a promise to phase out the tariffs imposed by Washington.
Chinatopix via AP

BEIJING (AP) — China’s foreign ministry on Monday urged Canada to free an executive of telecom equipment giant Huawei Technologies held for more than a year as she awaits an extradition trial.

Canada arrested Huawei’s chief financial officer, Meng Wanzhou, on Dec. 1 at Vancouver’s airport at the request of the U.S., which is seeking her extradition on fraud charges.

“We once again strongly urge Canada to take seriously China's solemn stance and concerns, take practical measures to correct its mistakes, release Ms. Meng Wanzhou as soon as possible, and ensure that she returns home safely,” Hua said in a routine briefing.

Meng’s arrest has further soured relations between Beijing and Washington as President Donald Trump pressures China on trade and seeks to limit business with Huawei on national security grounds. It also has embroiled Canada in the friction over Huawei: Chinese authorities detained two Canadians in an apparent attempt to pressure Canada to release Meng.

A daughter of Huawei’s founder, Meng is free on bail while staying in one of her two Vancouver homes, awaiting extradition hearings due to begin on Jan. 20.

It’s unclear if or how the latest flare up in antagonisms might affect trade talks between Beijing and Washington.

The Communist Party newspaper Global Times on Monday ran several articles and commentaries insisting there would be no agreement unless the U.S. commits to rolling back some tariffs the Trump administration has imposed on imports from China to pressure Beijing into altering its policies on trade and technology.

“Rolling back tariffs is a must. The China-U.S. trade war (was) instigated by the U.S. with tariffs, so the tariffs have to be cut first,” the newspaper quoted Wei Jianguo, a former Chinese commerce minister as saying.

It said there was a “reasonable choice” for Trump to roll back some tariffs for the first deal and leave others for later, to “save the optics of the deal in the U.S. political climate and save the phase one deal.”

Chinese officials earlier said the U.S. side had agreed to gradually phase out the tariffs as negotiations progress. The U.S. side did not confirm that.

Last week, both sides suggested that they were close to striking a deal. Chinese Vice Premier Liu He said he had invited senior U.S. officials to Beijing for further talks. Trump said the talks were in their “final throes” of negotiations.

New U.S. tariffs are set to kick in on many Chinese-made products, including laptops and smartphones, as of Dec. 15. A preliminary deal could avert that.

Promising to not implement the next tranche of tariffs would not suffice, the Global Times said.