ISM: Employment and Tariffs Still a Challenge for Manufacturing

The PMI registered 54.8 percent, a decrease of 2.5 percentage points from the March reading of 55.3 percent. 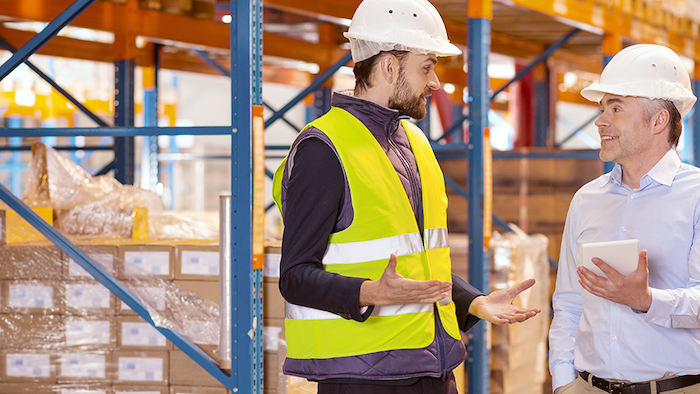 The PMI report, issued by The Institute for Supply Management, showed that manufacturing expanded in April, and the overall economy grew for the 120th consecutive month. The PMI registered 54.8 percent, a decrease of 2.5 percentage points from the March reading of 55.3 percent.

Timothy R. Fiore, CPSM, C.P.M., chair of the Institute for Supply Management (ISM) Manufacturing Business Survey Committee, explains that the real story of the past month can be found on the consumption side of things, which includes employment and production.

ISM’s Employment Index registered 52.4 percent in April, a decrease of 5.1 percentage points when compared to the March reading of 57.5 percent.

“Employment is still an issue,” Fiore comments. “Companies are still having trouble hiring and retaining workers. People are jumping from job to job, and baby boomers are continuing to retire.”

ISM’s Production Index registered 52.3 percent in April, which is a decrease of 3.5 percentage points when compared to the 55.8 percent reported for March, indicating growth in production for the 32nd consecutive month.

Fiore suggests that production had the ability to reduce backlog and increase customer inventory, but it didn’t. “So why wasn’t it?” he asks. “It wasn’t because of raw materials because the supply chain is stable, so you can really only argue that it’s because of these employment challenges.”

However, Fiore says the report indicates that supplier deliveries, inventory, and prices have remained stable. “The supply chain has been able to respond and adapt to market changes rapidly,” he explains.

The delivery performance of suppliers to manufacturing organizations slowed in April, as the Supplier Deliveries Index registered 54.6 percent. This is 0.4 percentage point higher than the 54.2 percent reported for March.

The Inventories Index registered 52.9 percent in April, an increase of 1.1 percentage points from the 51.8 percent reported for March.

The prices Index registered 50 percent in April, a decrease of 4.3 percentage points from the March reading of 54.3 percent, indicating stability in raw materials prices after an upward tick last month.

The new export orders number is in contraction mode, registering at 49.5 percent in April, a 2.2 percentage points lower compared to the March reading of 51.7 percent, indicating that new export orders contracted after 37 consecutive months of growth. Fiore comments on the contracting, saying, “Demand has softened; export markets are not as vibrant as they have been, and seem to be drying up a bit.”

April also saw relatively weak new order numbers, partially because of seasonality factors. New Orders Index registered 51.7 percent in April, which is a decrease of 5.7 percentage points when compared to the 57.4 percent reported for last month. 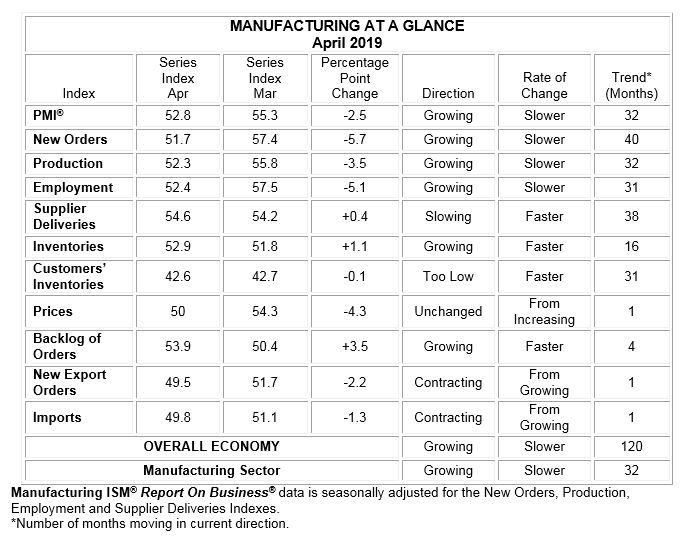 What Respondents Are Saying

An important aspect of the report is measuring industry sentiment. Seventeen percent of respondents' comments were related to tariffs. While this percentage is a significant decrease from the report’s peak of 48 percent, Fiore still isn’t completely satisfied. “We were hoping that tariffs wouldn’t be an issue anymore,” Fiore says, “but it still is.”

Comments from respondents also focused on turn around and maintenance, both scheduled and unscheduled. “This was especially true in the petroleum and coal industries,” he adds.

Petroleum, coal, and transportation contracted from a PMI stand point, which Fiore says hasn’t happened in a long time. “I’m not even sure when that last happened,” he adds.

In general, it appears that from the standpoint of optimism, the sentiment amongst those in the industry is decreasing slightly.

Fiore does add that backlog grew, and production was not able to keep up with new orders and keep the backlog down, which he believes is a positive sign for the future.