U.S. Trade Deficit Narrowed To $40.8B In September

The U.S. trade deficit declined in September to the lowest level in seven months as exports rebounded while imports shrank, reflecting the smallest monthly foreign oil bill in more than a decade. 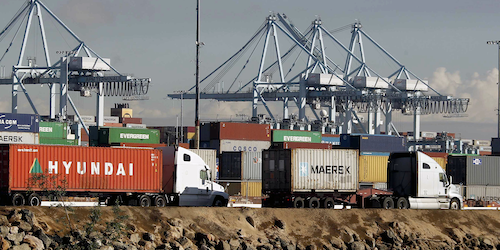 WASHINGTON (AP) — The U.S. trade deficit declined in September to the lowest level in seven months as exports rebounded while imports shrank, reflecting the smallest monthly foreign oil bill in more than a decade.

The trade deficit narrowed to $40.8 billion in September, down 15 percent from a $48 billion deficit in August, the Commerce Department reported Wednesday.

Economists are looking for the deficit to widen in the coming months as a weak global economy and strong dollar puts pressure on exports.

Through September, the U.S. trade deficit is running 3.9 percent above last year when the deficit for the full year totaled $508.3 billion. Economists are looking for a bigger deficit this year, reflecting a drop in exports, which are down 3.8 percent so far this year.

U.S. producers are facing export headwinds amid economic weakness in a number of major export markets. U.S. exports have also been hurt by the rising value of the dollar, which makes American goods more expensive on foreign markets.

The Obama administration is preparing to unveil the text of a trade agreement it reached last month with Japan and nine other Pacific Rim nations, the next step in the administration's effort to win congressional approval for the Trans-Pacific Partnership deal.

However, that approval has been complicated by the announced opposition to the pact by Hillary Rodham Clinton, who is running for the Democratic presidential nomination. Her opposition could make it harder for President Barack Obama to round up the Democratic votes he will need in Congress to get the deal approved.