China's economy gained steam in 2017, expanding at a 6.9 percent pace in 2017 in its first annual increase in seven years, according to data released Thursday that exceeded economists' forecasts and the government's target. 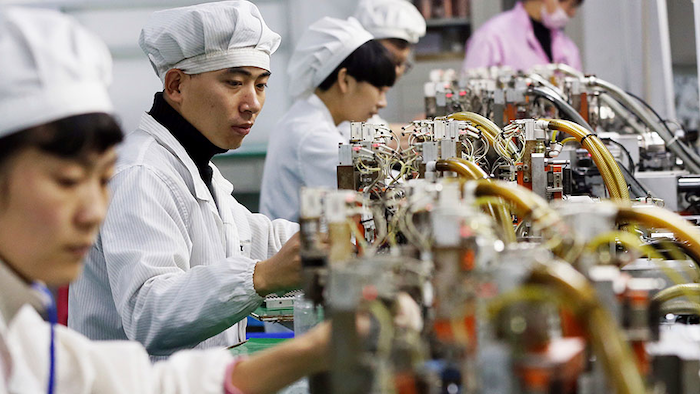 HONG KONG (AP) — China's economy gained steam in 2017, expanding at a 6.9 percent pace in 2017 in its first annual increase in seven years, according to data released Thursday that exceeded economists' forecasts and the government's target.

Buoyant consumer spending and robust exports helped drive the faster expansion, as the economy defied expectations of weaker growth in the latter half of the year due to curbs on bank lending.

The data show China's communist leaders have some extra wiggle room as they strive to wean the economy away from reliance on wasteful and polluting industries and exports in favor of slower but more sustainable consumer spending. The rebalancing has been complicated by Beijing's repeated infusions of credit to prevent activity from slowing too much, which has pushed up debt that analysts say is the biggest threat to economic stability.

The government had set a target of 6.5 percent growth after the economy expanded at a 6.7 percent annual pace in 2016, its slowest in 26 years.

Growth in the fourth quarter held steady at 6.8 percent, though that was a tick slower than the 6.9 percent pace of growth in the first half of the year, the report said.

"The national economy has maintained the momentum of stable and sound development and exceeded expectations," said the report released by the National Bureau of Statistics.

"While domestic demand should cool on tighter financial policy, China's policymakers want the slowdown in credit and the economy to be gradual. We project GDP growth to slow to 6.4 percent this year," he said in a commentary.

Earlier this week, Chen Qiufa, the governor of Liaoning province in China's rust-belt northeast region, admitted that economic figures were padded out from 2011 to 2014, the official Xinhua news agency reported. Similar cases have been reported recently by the port city of Tianjin and Inner Mongolia province.

"We have doubts about the accuracy of the official figures given how implausibly stable they have been in recent years," Julian Evans-Pritchard of Capital Economics said in a report, adding that his group's unofficial measure of activity showed a slower pace of growth but a more pronounced recovery.

"Admittedly, the monthly data for December, also published today, suggest that the economy had a relatively strong end to the year," he added.

The statistics bureau's commissioner, Ning Jizhe, vowed to fix the problem, though he said the recent cases of fake data were too small to affect the overall data.

"The accuracy of China's statistical figures and statistical system would not be affected by the problems of some individual local (government), region, enterprise, or unit," he told reporters.

Wang Chungying, a spokeswoman for China's State Administration of Foreign Exchange, told reporters in Beijing that the supply and demand of foreign exchange "have shifted to a basic equilibrium."