Senate Republicans are on track to pass a $4 trillion budget plan that shelves GOP deficit concerns in favor of the party's drive to cut taxes. 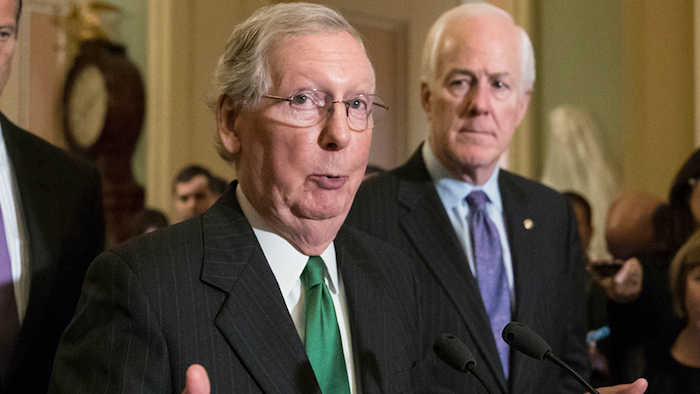 WASHINGTON (AP) — Senate Republicans are on track to pass a $4 trillion budget plan that shelves GOP deficit concerns in favor of the party's drive to cut taxes.

The nonbinding budget plan, slated for a vote late Thursday, would set the stage for tax legislation later this year that could pass through the Senate without fear of a filibuster by Democrats — and add $1.5 trillion to the deficit over the next 10 years.

The upcoming tax measure, always a top item on the GOP agenda this year, has taken on even greater urgency with the failure of the party to carry out its longstanding promise to repeal former President Barack Obama's signature health care law.

The House passed its version last week. It calls for tax cuts that don't add to the deficit and would pair the tax rewrite measure with $200 billion in spending cuts over the coming decade. Both plans seek to crack open a longstanding ban on oil and gas exploration in the pristine Arctic National Wildlife Refuge.

Under Capitol Hill's byzantine budget rules, the nonbinding budget resolution is supposed to lay out a long-term fiscal framework for the government. This year's measure, for instance, calls for $473 billion in cuts from Medicare over 10 years and more than $1 trillion from Medicaid. All told, Senate Republicans would cut spending by more than $5 trillion over a decade, though they don't attempt to spell out where the cuts would come from.

If the measure's politically difficult cuts were implemented, the budget deficit would drop to $424 billion after 10 years and average about $540 billion a year over the life of the plan, the Congressional Budget Office estimates.

Republicans use different math, relying on optimistic predictions of economic growth that average 2.6 percent a year — while ignoring growing, chronic deficits run by Social Security — to claim that their budget could actually generate a surplus by 2026.

In reality, Republicans aren't serious about implementing the measure's politically toxic proposals to cut Medicare, food and farm programs, housing subsidies, and transportation. In fact, lawmakers on both sides are pressing to break open the measure's tight spending "caps" on the Pentagon and domestic agency operations and pass tens of billions of dollars more in hurricane relief in coming days and weeks.

"Anything that we do here has to be completed in other committees in order to ever happen," said Budget Committee Chairman Mike Enzi, R-Wyo. "But this budget does slow Medicare's projected annual rate of growth by approximately 1 percent."

GOP leaders appear to have rounded up the votes to pass the plan late Thursday or early Friday. Sen. Rand Paul, R-Ky., is the only Republican to come out against the measure — despite wooing from President Donald Trump — while more moderate Republicans who bucked the party on health care earlier this year, such as Susan Collins of Maine, are backing the effort.

Details on the upcoming tax bill are still being worked out. It would permit lawmakers to use $1.5 trillion in debt-financed tax cuts to ease passage of a follow-up plan to sharply reduce corporate rates, cut taxes for most individuals, and eliminate taxes on multimillion dollar estates.

"The fact is, most of the rest of the world has been about the business of improving their tax code while we have not," said Sen. Pat Toomey, R-Pa. "This is our moment, our opportunity to catch up, and we could do it in a big way as long as we pass this budget."