The European Union is in a healthier economic state than it's been for more than a decade and is ready to move on from Brexit, the bloc's top official said Wednesday. 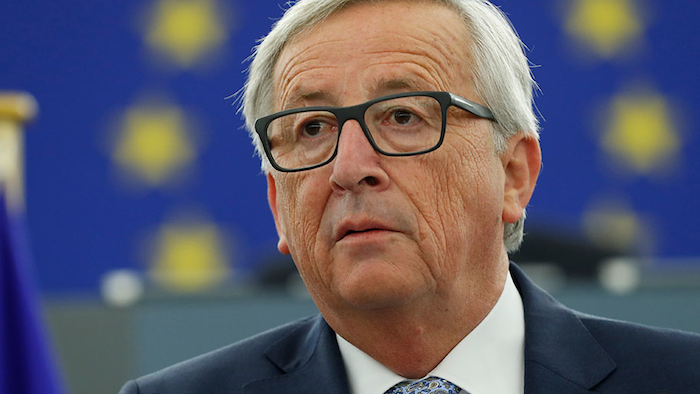 BRUSSELS (AP) — The European Union is in a healthier economic state than it's been for more than a decade and is ready to move on from Brexit, the bloc's top official said Wednesday.

Addressing lawmakers at the European Parliament, Commission President Jean-Claude Juncker said the EU is "bouncing back" after a tough decade that's seen much of the 28-country mired in an economic crisis and Britain vote to leave.

"The wind is back in Europe's sail," he said in an upbeat hour-long annual "State of the European Union" address in Strasbourg, France.

Juncker, whose Commission proposes EU legislation and polices the bloc's laws, said the EU is into its fifth year of economic recovery, with unemployment at a nine-year low.

"Let us make the most of the momentum, catch the wind in our sails," he said. "Europe can deliver for its citizens where and when it matters."

Since the global financial crisis first bared its teeth a decade ago, the EU project has been dealt a series of blows, most notably with Britain's decision last year to leave. It's also had to contend with a series of currencies afflicting the countries — currently 19 — that use the euro as their currency. However, the eurozone crisis appears to have abated somewhat and Greece is set to end its bailout era next summer.

With Britain due to leave the EU in March 2019, Juncker vowed that the bloc would take on no new members in the short-term, and he dealt a blow to Turkey's hopes of joining Europe's rich club anytime soon.

"Turkey has been moving away from the European Union in leaps and bounds," he said, criticizing Turkish President Recep Tayyip Erdogan and his government for arresting journalists and branding EU leaders "fascists and Nazis."

As the Union comes to terms with losing one of its biggest member states, Juncker called for EU leaders to meet in Romania the day after Britain leaves on March 29, 2019 to chart the bloc's way forward as 27 member states.

Juncker said the meeting should be held March 30 in the city of Sibiu, a picturesque city in Transylvania that was settled centuries ago by ethnic Germans from Luxembourg, Juncker's home country.

Juncker vowed that the EU "will move forward once Britain leaves," saying that "Brexit is not everything. It's not the future of Europe."

To cheering British lawmakers celebrating the country's departure, Juncker said: "I think you will regret it quite soon."

With the EU under fire for policies perceived to be blocking migrants in dangerous and sordid detention centers in Libya, Juncker said "Europe has got a collective responsibility" to help improve conditions there.

He told lawmakers that the EU must work closely with the U.N.'s refugee agency to ensure that this "scandalous situation" does not continue.

While he praised efforts that have sharply reduced migrant flows, he said Europe must continue to provide refuge to those fleeing persecution.

Europe, he insisted, "is not a fortress and must never become one."

He paid special tribute to Italy for its "tireless and noble work" at it bears the brunt of rescuing and helping most of the migrants arriving on Europe's shores.

"Italy is saving Europe's honor in the Mediterranean," Juncker said.

Juncker also said he will propose the establishment of a pan-European cybersecurity agency as online attacks around the world mount.

"Cyberattacks are sometimes more dangerous for the stability of democracies and economies than guns and tanks," he said.