Applications for U.S. Jobless Aid Inch Up to a 10-Month High

The number of people seeking unemployment benefits rose last week to the highest level since May, though the pace of applications remains at a level consistent with steady hiring. 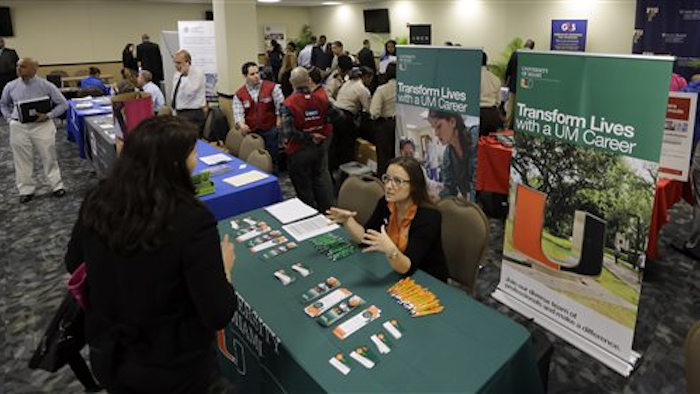 Washington, D.C. — The number of people seeking unemployment benefits rose last week to the highest level since May, though the pace of applications remains at a level consistent with steady hiring.

The number of applications tends to reflect the pace of U.S. layoffs. The four-week average has remained near or below 300,000 since September, a historically low level that typically signals healthy job gains.

More Americans are earning paychecks, and gas prices have plummeted from last summer, thereby boosting consumers' buying power. Americans also say they are more confident and are spending more, which has encouraged many businesses to hold on to their workers and to add staff.

There are some signs that heavy snow and unseasonably cold weather have played a role in increasing the number of layoffs. Several states said two weeks ago that applications had risen because of bad weather.

Kentucky said applications for unemployment benefits in that state rose nearly 3,000 in the week that ended Feb. 21 because of "inclement weather."

The state-level information is released with a one-week lag. Massachusetts, which has experienced huge snowfalls this winter, said applications jumped 3,800 two weeks ago, in part because of layoffs at schools.

Still, the four-week average of applications for benefits is nearly 10 percent lower than it was a year ago. The reduced number of applications has coincided with a big step-up in hiring. Employers added more than 1 million jobs from November through January, the strongest three-month pace since 1997.

That pace of hiring probably won't be sustained for much longer, economists say. But they foresee healthy job gains for the rest of this year. Economists have predicted that the government's February jobs report, due Friday, will show that 240,000 jobs were added.

The unemployment rate is expected to dip to 5.6 percent from 5.7 percent.

The strong job gains are showing signs of finally lifting paychecks for more workers. Average hourly pay rose 0.5 percent in January, the most in six years. Economists have forecast that wages ticked up 0.3 percent in February.

Other recent data suggest that the job market remains strong. Payroll processor ADP said Wednesday that businesses added 212,000 jobs in February. That was down from 250,000 in January but still a solid gain.

And a survey of services firms, including hotels, restaurants, insurance agencies and retailers, found that they stepped up hiring last month.