Organized labor's fierce opposition to President Barack Obama's trade agenda threatens to split the political left and deal a new blow to unions if the president prevails in a House vote that could come this week. 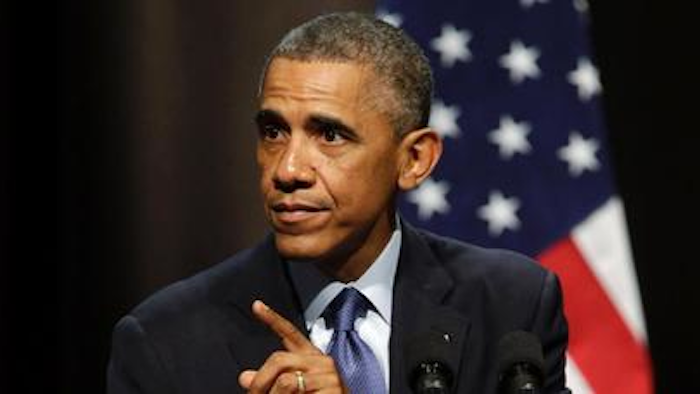 Organized labor's fierce opposition to President Barack Obama's trade agenda threatens to split the political left and deal a new blow to unions if the president prevails in a House vote that could come this week.

Last year, the United Auto Workers suffered a painful loss when workers at a Volkswagen plant in Tennessee voted not to join. Nationally, union membership has declined for years.

Nonetheless, labor groups say they have little to lose by battling trade deals they consider job-killers, and they're ready to divorce themselves from Democrats who think otherwise. In campaigns against would-be friends, union activists are picketing offices and running TV ads against congressional Democrats who have endorsed or remain open to Obama's bid for "fast track" negotiating authority.

"Labor is taking a huge risk," said Gary N. Chaison, a professor of industrial relations at Clark University in Massachusetts. Union activists could look like "extreme protectionists," he said, which many Americans consider an outdated approach as they seek jobs in a global economy.

Unions need smart, strategic thinking to recover from major setbacks in Wisconsin and elsewhere, Chaison said. "It's been an extremely tough time for labor," he said. "They must show they're part of the solution."

Unions and Democrats agree on most big issues, but trade bitterly divides many of them.

Obama says U.S. products must reach more foreign markets. He wants fast track powers to offer trade proposals that Congress can ratify or reject, but not change. If he obtains it, he's expected to push the long-negotiated Trans-Pacific Partnership with Japan, Malaysia, Canada, Mexico and several other countries.

The Democratic president is overwhelmingly relying on House Republicans to enact fast track legislation that survived a tough Senate vote. He needs perhaps two-dozen House Democrats, however, and unions are pounding his targets with calls, demonstrations and political threats.

Late Tuesday, House Republicans cleared the way for a vote as early as this week, while also making a concession that points to the need for more Democratic votes. The Rules Committee removed a provision, strongly opposed by most Democrats, that would have funded a job-training program with cuts in Medicare spending. Instead, the program will be paid for with higher penalties and tougher enforcement of tax violations involving some businesses and higher education tax credits.

The changes were made after a private meeting between Speaker John Boehner, R-Ohio, and Minority Leader Nancy Pelosi, D-Calif. Boehner strongly supports the trade bill, while Pelosi has been non-committal.

Strategists on both sides predict a close House vote, and many say the pro-trade forces are within striking distance. If they prevail, it will deliver a stinging rebuke to unions already facing waning influence. In 1983, about 17.7 million U.S. workers — or one in five — belonged to unions. Last year the total was 14.6 million, or 11.1 percent.

Even scholars who largely endorse labor's trade strategy say unions are fighting from a posture of relative weakness.

"They don't have that much power or prestige to lose," said Julius G. Getman, a labor law specialist at the University of Texas law school. Still, Getman said, labor's approach might win new allies from a burgeoning liberal movement that's associated with activists such as Sen. Elizabeth Warren, D-Mass.

Leading the opposition to the administration's trade agenda is the AFL-CIO, which generally hailed Obama's succession to Republican George W. Bush. Some member unions balked at the AFL-CIO's decision in March to suspend PAC donations in order to focus all resources on defeating fast track. But overall reaction has been hugely supportive, said Bill Samuel, the AFL-CIO's head of government relations.

"There's no risk in aggressively fighting for the right trade policy," Samuel said. "Our members expect the politicians we elect to fight for their jobs."

Samuel said union members routinely "put in thousands of hours" to knock on doors, phone voters and do other tasks to help elect candidates, nearly all of them Democrats.

Those defying them on trade are feeling the bite. For instance, the AFL-CIO is running a TV ad criticizing Rep. Ami Bera, D-Calif., for supporting fast track. The union says it wants a new congressman "with a backbone."

The AFL-CIO also is running ads and organizing protests against Democratic Rep. Kathleen Rice of New York, who originally said she would oppose fast track but announced her support for the bill over the weekend.

"Which Kathleen Rice can we trust?" the TV ad asks in a tone Democrats generally might expect from Republicans.

The House's leading trade proponent, Ways and Means Committee Chairman Paul Ryan, told The Associated Press on Tuesday that Democrats had added to the roughly 18 of their members willing to vote for the package.

"They have a few more than that, but we need them to deliver more than they've publicly announced," said Ryan, R-Wis. "We're adding to our 'yes' column. We're very close."

Samuel said the AFL-CIO has no qualms about going all-out to block Obama's trade agenda. Still, he acknowledged the effort might fail.

If the House approves fast track, Samuel said, "it will be with no votes to spare."