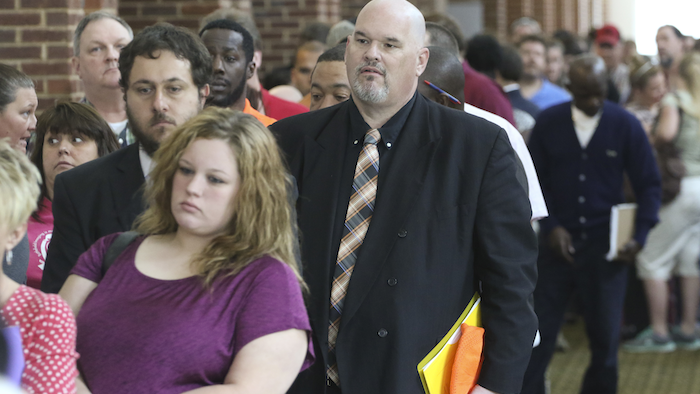 WASHINGTON (AP) — The rate of hiring by U.S. businesses slowed in July, according to a private survey. But job gains remained at a solid level, which should help boost overall economic growth.

Payroll processor ADP said Thursday that its survey shows that companies added 185,000 jobs last month, down from 229,000 in June.

Job growth since early 2014 has lifted home sales to their strongest pace in eight years. Construction firms added 15,000 jobs last month. But low oil prices weighed on the manufacturing sector, which added just 2,000 jobs. Energy firms have cut back on their orders for equipment, machinery and pipeline as oil prices have stayed below $50 a barrel.

The decline in oil prices "probably will result in extended layoffs in the energy sector," said Mark Zandi, chief economist at Moody's Analytics. The result of those layoffs will be fewer job gains this year compared to 2015.

Still, Zandi sees monthly job growth as averaging a solid 200,000 this year, roughly double the pace of the number of workers entering the job market. Continued gains at that pace should further lower the unemployment rate and encourage the Federal Reserve to raise interest rates from its current near-zero levels.

Fed Chair Janet Yellen has said that it could be appropriate to raise rates later this year, removing a source of financial stimulus that was introduced in late 2008 to boost spending, borrowing and economic growth.

Last month, hiring cooled off across industries. The business services sector hired 42,000 workers in June, down from 61,000 in June. The pace of hiring also slipped in the financial industry and in the trade, transportation and utilities.

Hiring also occurred at a slower pace for small businesses with fewer than 50 employees. They added 59,000 jobs last month, half of the gains in June. But hiring picked up among larger companies with more than 1,000 workers, which added 47,000 jobs in July, almost eight times more than their hiring levels in June.

On Friday, the government will issue its official jobs report for July. Economists forecast it will show that employers added 225,000 jobs, and the unemployment rate held at 5.3 percent for the second straight month.

The ADP survey covers only private businesses, however, and frequently diverges from the official figures.