The plant, which had been due to start producing electricity in 2023, has been mired in delays, and critics say it is uneconomical. Britain has agreed to grant operators a fixed above-market electricity price for 35 years to ensure their investment will break even. 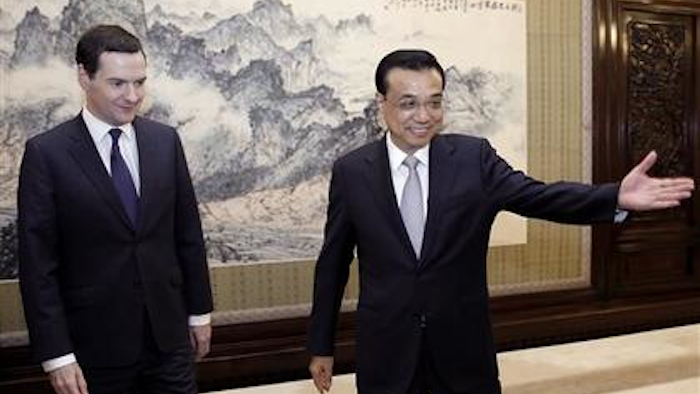 The British government said Monday it will underwrite 2 billion pounds ($3.1 billion) in Chinese financing for a new nuclear power plant in southwest England, as it encourages major Chinese investment in the U.K. nuclear sector.

Treasury chief George Osborne, on a trip to China, said Britain would underwrite China's stake in the Hinckley Point power station. He said the deal "opens the door to majority Chinese ownership of a subsequent nuclear project" planned for England's southeast.

The plant, which had been due to start producing electricity in 2023, has been mired in delays, and critics say it is uneconomical. Britain has agreed to grant operators a fixed above-market electricity price for 35 years to ensure their investment will break even.

Visiting Beijing ahead of a state visit to Britain next month by Chinese President Xi Jinping, Osborne hailed deals he says will make London's financial district a bridge between China and Western markets. They include an agreement for the People's Bank of China to issue renminbi-denominated short-term bonds in London — the first time this has been done outside China.

"I want the U.K. to be the natural Western hub for renminbi trading," Osborne said.