U.S. manufacturing production fell for the second straight month in September as factories cranked out fewer appliances, computers, and electronics. 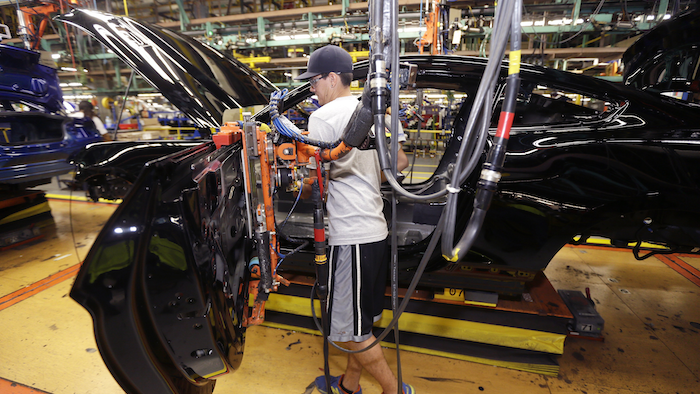 Factory output declined 0.1 percent, the Federal Reserve said Friday, following a drop of 0.4 percent in August. Manufacturers also cut back on production of steel and other metals.

The decline suggests that a strong dollar, weak overseas economies, and cautious U.S. consumers are holding back factory output. Many companies are also focused on reducing stockpiles that were built up in the spring by cutting back on orders for new goods.

Factories have had a tough year and there is little sign of improvement any time soon. A strong U.S. dollar and weak overseas growth have hammered U.S. exports. The dollar has risen about 13 percent in value against other currencies in the past 12 months. That makes U.S. products more expensive, and therefore less attractive, in other countries.

Overall industrial production has increased just 0.4 percent in the past year, its weakest showing since the Great Recession.

"In 2015 it has been one thing after another hammering manufacturing in almost everything except motor vehicles," Michael Montgomery, an economist at HIS Global Insight.

Auto sales jumped nearly 16 percent in September from a year earlier and are at the highest level in a decade. That has boosted auto production, which 0.2 percent last month.

But outside of cars, Americans are spending cautiously. Retail sales have barely grown in the past two months. That's left many businesses with warehouses full of unsold goods. With such large inventories they see little need to order new products.

Big overseas economies are grappling with slower or nonexistent growth, including China, Canada, Europe, and Brazil. Canada, the United States' largest trading partner, is in recession.

China and Brazil had been critical sources of demand for American-made industrial machinery, such as mining trucks, construction equipment, and agricultural machines. Their economic slowdowns have hit sales and profits for companies such as Caterpillar and United Technologies.

Falling oil prices have also dragged down factory output. Crude oil prices, which were around $60 per barrel in the spring, have fallen to about $49. The decline has forced energy firms to curtail drilling, eliminating much of the need for new pipelines and equipment that had boosted factory orders in previous years.

Overall, the economy is expected to expand at just a 1 percent to 1.5 percent annual rate in the July-September quarter, a sharp slowdown from 3.9 percent in the April-June quarter.