Here's the assignment President Barack Obama has won with his re-election: Improve an economy burdened by high unemployment, stagnant pay, a European financial crisis, slowing global growth and U.S. companies still too anxious to expand much. 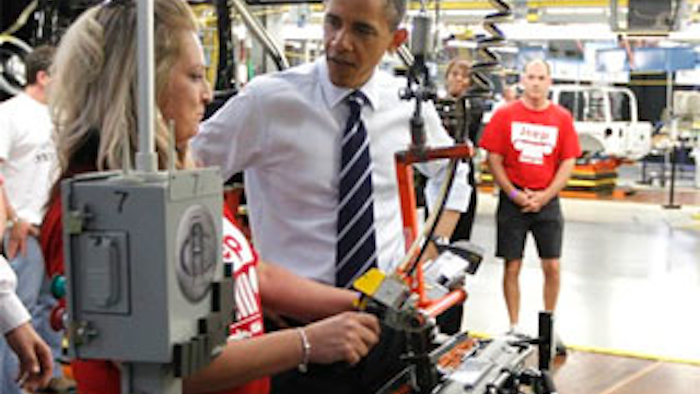 Here's the assignment President Barack Obama has won with his re-election: Improve an economy burdened by high unemployment, stagnant pay, a European financial crisis, slowing global growth and U.S. companies still too anxious to expand much.

And, oh yes, an economy that risks sinking into another recession if Congress can't reach a budget deal to avert tax increases and deep spending cuts starting in January.

Yet the outlook isn't all grim. Signs suggest that the next four years will coincide with a vastly healthier economy than the previous four, which overlapped the Great Recession.

Obama has said he would help create jobs by preserving low income tax rates for all except high-income Americans, spending more on public works and giving targeted tax breaks to businesses.

He used his victory speech in Chicago to stress that the economy is recovering and promised action in the coming months to reduce the government's budget deficit, overhaul the tax system and reform immigration laws.

"We can build on the progress we've made and continue to fight for new jobs and new opportunity and new security for the middle class," Obama said.

The jobs picture has already been improving gradually. Employers added a solid 171,000 jobs in October. Hiring was also stronger in August and September than first thought.

Cheaper gas and rising home prices have given Americans the confidence to spend slightly more. Retailers, auto dealers and manufacturers have been benefiting.

That said, most economists predict the improvement will remain steady but slow. The unemployment rate is 7.9 percent. Obama was re-elected Tuesday night with the highest unemployment rate for any incumbent president since Franklin Roosevelt.

Few think the rate will return to a normal level of 6 percent within the next two years. The Federal Reserve expects unemployment to be 7.6 percent or higher throughout 2013.

Economists surveyed last month by The Associated Press said they expected the economy to grow a lackluster 2.3 percent next year, too slight to generate strong job growth. From July through September, the economy grew at a meager 2 percent annual rate.

Part of the reason is that much of Europe has sunk into recession. Leaders there are struggling to defuse a debt crisis and save the euro currency. Europe buys 22 percent of America's exports, and U.S. companies have invested heavily there. Any slowdown in Europe dents U.S. exports and corporate profits.

And China's powerhouse economy is decelerating, slowing growth across Asia and beyond.

Most urgently, the U.S. economy will fall over a "fiscal cliff" without a budget deal by year's end. Spending cuts and tax increases of about $1.2 trillion will start to kick in. The combination of those measures would likely trigger a recession and drive unemployment up to 9 percent next year, according to estimates by the Congressional Budget Office.

Many U.S. employers are wary of expanding or hiring until that potential crisis is averted. That's why analysts have said resolving, or at least delaying, the fiscal cliff should be the most urgent economic priority for the White House.

In the longer run, analysts are more optimistic. Americans are feeling generally better about the economy. Measures of consumer confidence are at or near five-year highs.

And the main reason unemployment rose from 7.8 percent in September to 7.9 percent in October was that more people felt it was a good time to look for work. Most found jobs. Those who didn't were counted as unemployed. (The government counts people without jobs as unemployed only if they're looking for one.)

A brighter outlook among consumers is due, in part, to a steady increase in home prices after a painful six-year slump. Higher home prices can help create a "wealth effect," making homeowners feel richer and spurring more spending.

Americans have also been shrinking debts and saving slightly more. Household debt as a percentage of after-tax income dropped from about 125 percent before the recession to 103 percent in the April-June quarter, according to the Federal Reserve's latest data. That ratio was roughly 90 percent in the 1990s.

But thanks to record-low interest rates, the cost of repaying those debts has dropped sharply. That, in turn, will free up more money for consumers to spend on cars, appliances and other goods.

Americans paid 10.7 percent of their after-tax income in interest on mortgages, credit cards and other consumer debt in this year's April-June quarter, according to the Fed. That was down from 14 percent at the end of 2007. And it's the lowest proportion since 1993.

"That's 3 percentage points of disposable income that I am no longer using to pay for stuff that I bought earlier but I can instead use to buy stuff now," noted Alan Levenson, chief economist at T. Rowe Price.

Economists note that economic recoveries after financial crises tend to be painfully slow. In part, that's because time is needed for consumers to reduce debts and for banks to recover and lend again.

Paul Ashworth, an economist at Capital Economics, noted that banks have boosted lending for the past 18 months — another sign that the passage of time is helping the economy rebound.

Obama "is going to have an easier time of it ... because we're further along the road to recovery after the financial crisis," Ashworth said.