Orders to U.S. factories fell in April for the first time in five months amid declining demand for heavy machinery, iron and steel, and commercial airplanes. 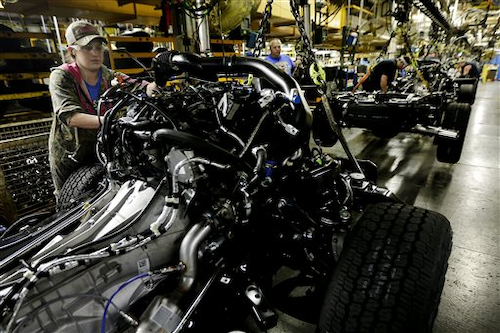 WASHINGTON — Orders to U.S. factories fell in April for the first time in five months amid declining demand for heavy machinery, iron and steel, and commercial airplanes. A key category that tracks business investment was weak for a third month.

Factory orders edged down 0.2 percent in April after a 1 percent increase in March, the Commerce Department said Monday. It was the first decline since a 2.3 percent drop last November.

A category that serves as a proxy for business investment posted a tiny 0.1 percent gain. Orders in this closely watched category had been flat in March.

The weakness in April was expected to be temporary, given hopes that manufacturing has started to bounce back in recent months from a prolonged slump last year.

Orders for durable goods — items ranging from bicycles to battleships that are expected to last at least three years — dropped 0.8 percent in April. Demand for nondurable goods, a category that covers such things as paper, chemicals and food, rose 0.4 percent in April.

Orders for transportation equipment in April fell 1.4 percent, as a 0.6 percent rise in demand for motor vehicles was offset by a 9.1 percent drop in orders for commercial aircraft, a volatile category.

Demand for machinery contracted 0.7 percent, reflecting a 16 percent plunge in demand for construction machinery. Orders for primary metals fell 0.7 percent, with demand for iron and steel down 2 percent.