U.S. Job Openings Rise, Yet Employers Cut Back On Filling Them

The figures suggest that an annual economic growth rate of just 0.8 percent in the first three months of the year has caused businesses to postpone hiring decisions. 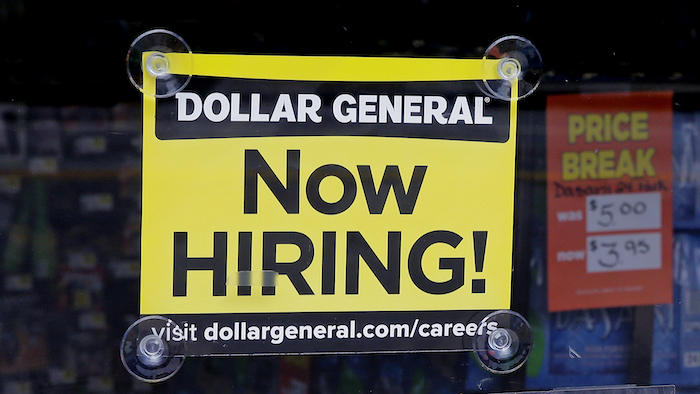 In this Wednesday, May 18, 2016, photo, a "Now Hiring" sign hangs in the window of a Dollar General store in Methuen, Mass. On Wednesday, June 8, 2016, the Labor Department reports on job openings and labor turnover for April. (AP Photo/Charles Krupa)

WASHINGTON (AP) — U.S. employers advertised the most open jobs in nine months in April but pulled back on filling them, a sign of caution that may reflect concerns about tepid economic growth.

The figures suggest that an annual economic growth rate of just 0.8 percent in the first three months of the year has caused businesses to postpone hiring decisions. There are other reasons that companies may not fill open jobs: They may not be able to find enough qualified candidates, or may not be offering sufficient pay to entice enough applicants.

The increase in available jobs holds out hope that hiring could rebound this summer after the spring slowdown. And the number of layoffs in April fell 122,000 to 1.65 million, according to Wednesday's report, a low level that shows employers aren't worried enough about the economy to cut more jobs.

"If firms really are pulling back, the first thing they would do is stop advertising jobs," said Paul Ashworth, an economist at Capital Economics.

But one frustrating characteristic of this recovery for job seekers has been a persistent willingness among employers to leave job openings unfilled for a much longer period than in the past. As a result, it isn't clear what the increase in job openings will mean for future hiring. The rise in April was followed by May's sharply lower figure for net job gains.

Most recent data indicates that hiring has slowed this year. A dismal jobs report on Friday showed that employers added only 38,000 jobs in May, the fewest in more than five years. In the last three months, job gains averaged just 116,000, about half the monthly gain of 230,000 last year.

The unemployment rate fell to 4.7 percent in May, but only because many unemployed stopped looking for work. The government only counts people as unemployed if they are actively searching for jobs.

Wednesday's figures track total hiring in April and come from a report known as the Job Openings and Labor Turnover survey, or JOLTS. The monthly jobs report released last week calculated a net total of job gains in May after subtracting those who quit, retired or were laid off.

The job market's health is a key factor in the Federal Reserve's deliberations over when it will next raise the short-term interest rate it controls. JanetYellen, chair of the Federal Reserve, on Monday said last Friday's jobs report was "disappointing."

But she also cautioned against focusing too much on one report, and pointed to the high levels of available jobs and healthy quits as evidence that the labor market is still in decent shape.

More than 2.9 million people quit their jobs in April, a solid figure. More quitting is evidence that employees are finding new jobs, usually at higher pay.