Trump Reviews 'Made in America' Products at the White House

Checking out a speedboat, a fighter jet and a giant industrial magnet parked on the White House driveway, President Donald Trump showcased an array of "Made in America" products Monday as his administration pushes back aggressively against critics who say his punishing tariffs on imported goods threaten to harm the U.S. economy. 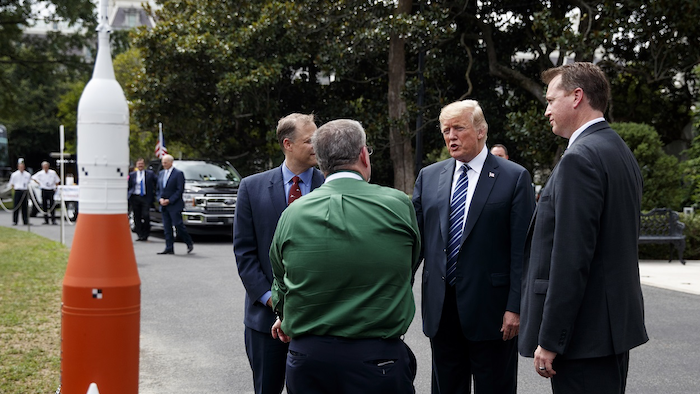 President Donald Trump participates in a tour during a "Made in America Product Showcase" at the White House, Monday, July 23, 2018, in Washington. Image credit: AP Photo/Evan Vucci

Checking out a speedboat, a fighter jet and a giant industrial magnet parked on the White House driveway, President Donald Trump showcased an array of "Made in America" products Monday as his administration pushes back aggressively against critics who say his punishing tariffs on imported goods threaten to harm the U.S. economy.

Trump's event with a smorgasbord of American goods came at the start of a week in which trade discussions are expected to dominate, including talks with European officials and a trip to Illinois in which the president is planning to visit a community helped along by his steel tariffs.

Trump has vowed to force international trading partners to bend to his will as he seeks to renegotiate a series of trade deals he has long argued hurt American workers. But as he deepens the U.S. involvement in trade fights, it raises questions on whether American consumers will feel the pain of retaliatory tariffs — and whether the president will incur a political price for his nationalistic trade policies in the 2018 midterm elections.

"Our leaders in Washington did nothing, they did nothing. They let our factories leave, they let our people lose their jobs," Trump said at the White House. "That's not free trade, that's fool's trade, that's stupid trade and we don't do that kind of trade anymore."

Trump noted that he would be meeting Wednesday with European officials, including European Commission President Jean-Claude Juncker. The U.S. and European allies have been at odds over the president's tariffs on steel imports and are meeting as the dispute threatens to spread to the lucrative automobile business. "Maybe we can work something out," he said.

On Thursday, the president will visit Granite City, Illinois, the home of a U.S. Steel Corp. mill that has reopened after he imposed tariffs on steel imports.

On the South Lawn, the president walked among a number of products manufactured across the nation, including a Lockheed Martin F 35 aircraft from Maryland, a Ford F-150 pickup truck from Michigan, a Newmar recreational vehicle from Indiana and a Ranger speedboat from Arkansas.

Trump has already put taxes on imported steel and aluminum, saying they pose a threat to U.S. national security, an argument that enrages staunch U.S. allies such as the European Union and Canada.

And he's already imposed tariffs on $34 billion in Chinese imports in a separate dispute over Beijing's high-tech industrial policies. He has threatened to ratchet that up past $500 billion.

"He likes tariffs," said William Reinsch, a former U.S. trade official under President Bill Clinton now at the Center for Strategic and International Studies. "His preferred remedy is always tariffs, whether it makes any sense or not."

"It's a policy of victimization: 'Other people have been taking advantage of the United States for years ... Now they have to pay,'" Reinsch said, echoing the president's argument.

Trade analysts say the United States has not pursued such aggressive trade policies in decades.

"I can't think of another time when you had as many battles and particularly as many battles with no resolution in sight," said Edward Alden, senior fellow at the Council on Foreign Relations.

In 1971, President Richard Nixon imposed a broad 10 percent import tax for four months to pressure Japan and European countries to drive up the value of their currencies. The idea: provide relief to American exporters, who were being put at a price disadvantage by a strong dollar.

In 1930, the U.S. raised tariffs dramatically to protect American industry, encouraging other countries to do the same in a global trade war that made the Great Depression worse.

Economists said the tariffs that Trump has imposed so far — and the resulting retaliation — are unlikely to do much economic damage. But things could escalate rapidly.

"If you look at what's teed up, particularly with China and with the auto tariffs, pretty soon you are talking about some pretty large numbers. Those will do some real damage," Alden said.

Oxford Economics has calculated that a full-blown U.S.-China trade war — in which each country taxes all the other's imports — would shave 1 percent off the U.S. economy and wipe out 700,000 jobs in the United States by 2020.

The Peterson Institute for International Economics has estimated that a trade war over autos could cost up to 1.2 million American jobs.

Critics said Trump's aggressive approach makes it tough for other countries to offer concessions, lest they be seen by their own people as caving in to bullying.

"The Trump administration has not left an easy path to walk away from the fights they've created," Alden said.