The world's top financial officials called Sunday for more dialogue on trade disputes that threaten global economic growth, with one warning that differences remain and tensions could escalate further. 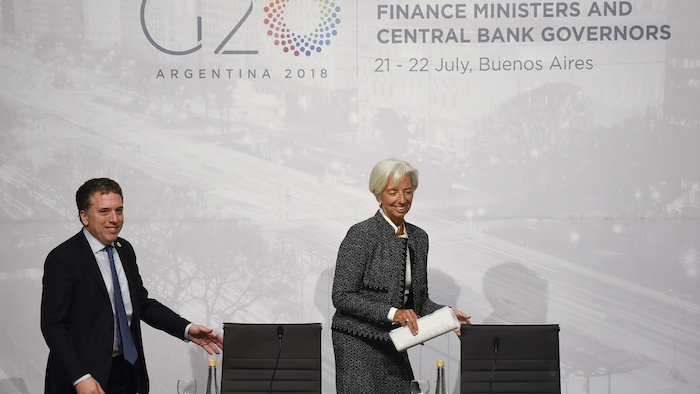 The world's top financial officials called Sunday for more dialogue on trade disputes that threaten global economic growth, with one warning that differences remain and tensions could escalate further.

The two-day meeting of finance ministers and central bankers from the Group of 20 nations came as the United States clashes with China and other nations over trade, with the nations imposing tariffs on billions of dollars of the other's goods.

A final communique said that although the global economy remains strong, growth is becoming "less synchronized" and risks over the short and medium terms have increased.

"These include rising financial vulnerabilities, heightened trade and geopolitical tensions, global imbalances, inequality and structurally weak growth, particularly in some advanced economies," the communique said. "We ... recognize the need to step up dialogue and actions to mitigate risks and enhance confidence."

On Friday, President Donald Trump renewed his threat to ultimately slap tariffs on a total of $500 billion of imports from China — roughly equal to all the goods Beijing ships annually to the U.S. The White House has also itemized $200 billion of additional Chinese imports that it said may be subject to tariffs.

The U.S. has also imposed tariffs of 25 percent on steel and 10 percent on aluminum, including from Europe. China, the European Union, Canada, Mexico and Turkey have counterpunched with taxes on U.S. goods. EU tariffs on American products include Harley-Davidson motorcycles, cranberries, peanut butter, playing cards and whiskey.

EU financial affairs commissioner Pierre Moscovici warned that such disputes are a threat.

"Protectionism, I want to insist on that, is good for no one," Moscovici told reporters. "Trade wars are not easy ... they create no winners, only casualties."

Mnuchin said there had been no "substantive discussions" with China about trade during the meeting. Asked what it would take to re-start talks with the Asian giant, he said, "Anytime that they want to sit down and negotiate meaningful changes, I and our team are available."

As the gathering wound up, Moscovici said differences of position remain despite talks.

"These meetings have been taking place in an international context which is very challenging. ... Trade tensions remain high and they threaten to escalate further," he said.

Christine Lagarde, managing director of the International Monetary Fund, has warned that a wave of tariffs could significantly harm the global economy, lowering growth by about 0.5 percent "in the worst-case scenario."

Mnuchin disagreed Sunday, saying that overall, the U.S. economy has not been harmed by the trade battles set off by Trump's get-tough policies. He acknowledged, however, that some individual sectors have been hurt and said U.S. officials are looking at ways to help them.

"We see some micro impacts where people, our counterparts, are targeting very, very specific items, in very specific communities," he said. "But from a macro standpoint, we do not yet see any significant impact on the economy."

So far, global markets have remained generally calm despite the U.S.-China trade war and the other trade conflicts.

But analysts say they expect Trump will impose more tariffs on China and potentially other key U.S. trading partners. With those nations almost certain to retaliate, the result could be higher prices for Americans, diminished export sales and a weaker U.S. economy by next year, they say.

Moscovici said the G-20 meeting had not been tense. He said that countries must remain "cool-headed and maintain a proper sense of perspective" and that the EU remains open to dialogue.

"That's why EU President Jean-Claude Juncker and EU Trade Commissioner Cecilia Malmstrom will meet with Trump" in Washington next week, he said. "We hope this meeting will be productive and successful."

Mnuchin said that the U.S. looks forward to those discussions.

The Group of 20 nations is composed of traditional economic powers such as the United States, Japan and Germany and emerging nations such as China, Brazil, India and Argentina.

Officials in Buenos Aires also discussed issues including the future of work and infrastructure for development, the international tax system and financial inclusion. It is the third of five meetings by finance ministers and central bankers scheduled in advance of a meeting of G-20 national leaders in Argentina to be held Nov. 30-Dec 1. Mnuchin said Trump plans to attend.