China's economic growth slowed in the quarter ending in June, adding to challenges for Beijing as its tariff battle with Washington escalates. 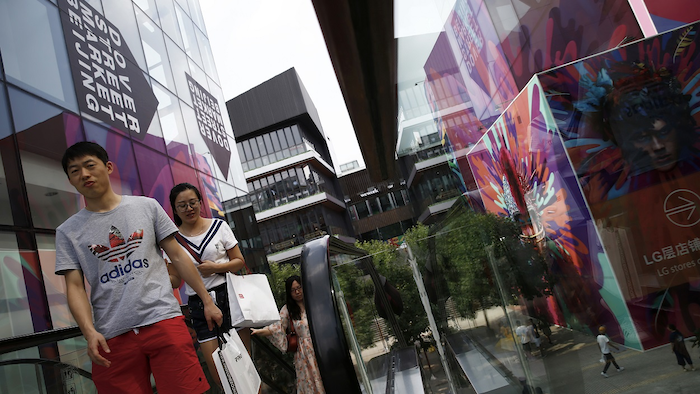 China's economic growth slowed in the quarter ending in June, adding to challenges for Beijing as its tariff battle with Washington escalates.

The world's second-largest economy expanded by 6.7 percent over a year earlier, down from the previous quarter's 6.8 percent, the government reported Monday.

Key drivers of growth including spending on construction and other investments were weakening even before the dispute with Washington erupted. Forecasters have expected a slowdown since Beijing tightened lending controls last year to rein in surging debt.

Growth was "generally stable" but "the uncertainties of the external environment are mounting," said Mao Shengyong, a spokesman for the National Bureau of Statistics.

Chinese leaders have expressed confidence their $12 trillion-a-year economy can survive the tariff war with U.S. President Donald Trump. Beijing is resisting American pressure to change industrial policies Washington says are based on stealing or pressuring foreign companies to hand over technology and might threaten U.S. industrial leadership.

But forecasters said the downturn is likely to deepen as Beijing tightens financial controls and trade tensions worsen.

"There are risks that Chinese growth will slow more abruptly," Citigroup economists said in a report.

Trade contributes less to China's economic growth than it did a decade ago but still supports millions of jobs. Even though Trump's first tariff hike didn't take effect the current quarter, exporters say American orders started to fall off as early as April.

Unless the two sides restart negotiations, "the conflict will escalate further, with major economic implications for themselves and the global economy," said Kuijs.

Of greater concern than trade is "slowing domestic demand within China's economy," said Tom Rafferty of the Economist Intelligence Unit in a report.

China is the No. 1 trading partner for its Asian neighbors and buys oil, iron ore and other raw materials from Australia, Brazil and elsewhere. Chinese consumers are an increasingly important market for food, clothes, electronics and other goods.

Investment in factories, housing and other fixed assets decelerated in the latest quarter. It rose by 6 percent in the first half, down 1.5 percentage points from the first quarter.

Chinese leaders are in the midst of a marathon effort to encourage self-sustaining growth driven by domestic consumption and reduce reliance on exports and investment.

Beijing has responded to previous downturns by flooding the state-dominated economy with credit. But that has swelled debt, prompting concerns about risks to the banking system. The ruling Communist Party has made controlling financial risks a priority this year, suggesting it will resist easing lending controls.

Retail spending in June rose by 9 percent over a year earlier, a half-percentage point higher than in May. The increase was driven by rapid growth in the sales of higher-end consumer goods such as cosmetics and audio-video equipment.

Forecasters say if threatened tariff hikes by both sides are fully carried out, that could cut China's 2019 growth by up to 0.3 percentage points.

Mao, the statistics bureau spokesman, declined to say how much the dispute might hurt Chinese economic growth.

"But generally speaking, trade frictions unilaterally started by U.S. will have an impact on the economy of both countries," Mao said.