U.S. consumer prices, excluding the volatile food and energy categories, rose 0.3 percent last month. That was the biggest climb in a year and is likely to fan inflation fears in financial markets. 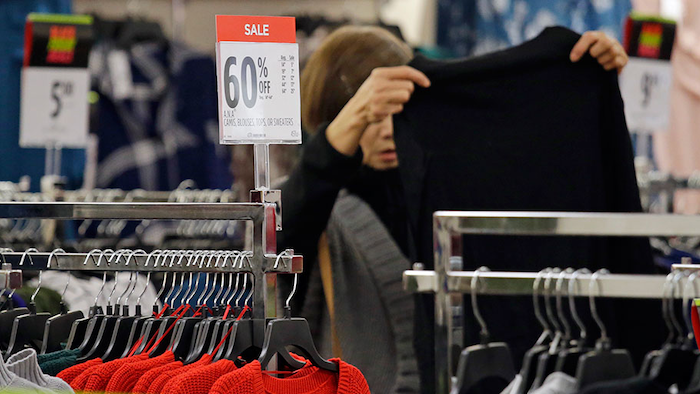 WASHINGTON (AP) — U.S. consumer prices, excluding the volatile food and energy categories, rose 0.3 percent last month. That was the biggest climb in a year and is likely to fan inflation fears in financial markets.

The Labor Department says overall consumer prices rose 0.5 percent in January, the most in four months. Inflation rose 2.1 percent from a year earlier and core prices increased 1.8 percent. The increases were led by much higher clothing costs and more expensive car insurance.

Both measures show that inflation is mostly contained, but the increase in core prices will likely make investors nervous. Analysts are hyper-focused on whether faster price increases may cause the Federal Reserve to raise short-term interest rates faster than expected. Higher interest rates make it more expensive for consumers and businesses to borrow and spend and could slow growth.

Stock futures fell after the report was released, while bond yields ticked up. Futures for the Dow Jones industrial average fell about 250 points.

Clothing costs jumped 1.7 percent in January after three months of declines. That was biggest monthly gain since 1990. Auto insurance prices rose 1.3 percent, the most since 2001.

Gasoline prices rose 5.7 percent last month, pushing up the headline index. Gas prices have risen a bit more this month: On Wednesday, the nationwide average gas price was $2.56 a gallon, up three cents from a month earlier.

Despite the market's jitters, inflation isn't yet much of a threat to consumers. The 1.8 percent increase in core prices is still below the Fed's 2 percent target. The Fed follows a different inflation gauge, which hasn't consistently topped 2 percent for six years.