Pointing A Finger At Fellow Economists For Backlash To Trade

A new book argues that most economists ignored that global free trade, for all its benefits, inevitably ends up depressing some industries and communities. 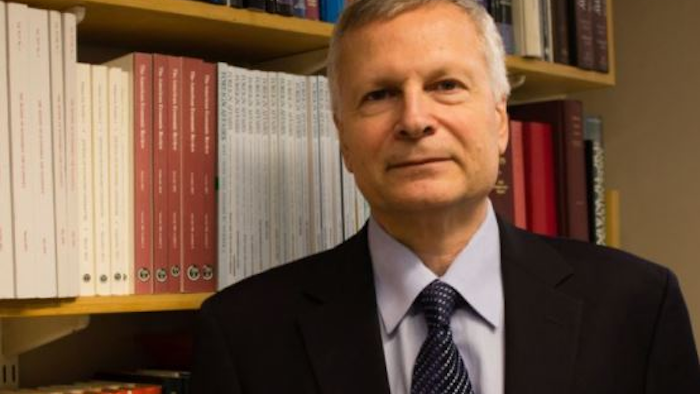 Yet economists themselves bear some blame for the backlash against free trade and globalization that helped propel Trump to the White House and Britain to abandon the European Union.

So says Dani Rodrik, a Harvard economist, in a provocative new book. In "Straight Talk on Trade: Ideas for a Sane World Economy," Rodrik argues that most economists long ignored what their own scholarship had made clear: That global free trade, for all its benefits, inevitably ends up depressing some industries and communities.

Economists kept quiet about this, Rodrik argues, because they feared that any criticism of free trade would empower "protectionist" critics who oppose open trade in nearly all forms.

But according to Rodrik, it all backfired: By dodging an honest debate on the pros and cons of open trade, he says, economists perversely "empowered the barbarians" and made it easier for "extremists and demagogues" to win public support.

"Economic theory teaches us that globalization and openness to trade cause a lot of redistribution of income," Rodrik says. "The flip-side of gains from trade is that some people, some communities, some parts of the country end up becoming worse off. That wasn't a mystery. That's what economists were teaching all along."

Rodrik, a 60-year-old Turkish-born professor of international economy at Harvard's Kennedy School of Government, has cast a critical eye on globalization for years. The Associated Press spoke with him recently about his latest book, Trump and his policies and how economists are responding to discontent with globalization and its consequences.

Rodrik wants to be clear: He supports free trade. But he is critical of what he calls "hyperglobalization" — something he says involves wresting control of commerce from individual governments and handing it to global institutions to spur ever-freer-flowing trade and investment. When many European countries abandoned their own currencies and adopted the euro, for example, they effectively turned their economic policy over to the European Central Bank.

Countries should form their own policies, Rodrik says, guided by the likely impact on workers and communities. If European nations fear the consequences of genetically modified foods for people, for instance, they should be free to ban them — even knowing the trade-off will likely be fewer food choices and higher prices.

Some of his peers take issue with Rodrik's argument. One of them, C. Fred Bergsten, director emeritus of the Peterson Institute for International Economics, has sparred for years with Rodrik over the consequences of globalization. Bergsten argues that while some economists downplayed the costs of free trade, others, including at Peterson, backed programs to help workers who lose out to foreign competition and train them for new careers.

More at fault, Bergsten says, are business leaders and free-trade advocates in Congress who pushed trade deals but refused to pay for the safety-net programs that would support displaced workers. Advocates of free trade "are often the very same people who are most resistant to even modest programs" of assistance to those hurt by trade, Bergsten contends.

Yet in Rodrik's view, recent free-trade deals have evolved from simple efforts to pry open closed markets into complex deals that reward powerful corporations but often cause workers to lose jobs to cheaper labor in countries with lax workplace and environmental safeguards.

Rodrik, points, for example, to the Trans-Pacific Partnership, a deal with 11 Pacific Rim countries that Trump nixed in January. The deal would have served pharmaceutical companies by strengthening patent protections on their drugs, thereby delaying poorer countries' access to cheaper generics.

Trade deals contain "thousands and thousands of pages of detailed rules," Rodrik says. "Do we protect labor and affected communities, or do we protect pharmaceutical companies or large multinationals or financial establishments?"

Rodrik says he empathizes with the grievances that led to Trump's election. He agrees with the president, for example, that the North American Free Trade Agreement with Mexico and Canada cost America jobs by opening the U.S. market to cheap Mexican imports and by encouraging U.S. manufacturers to move jobs to capitalize on lower-wage labor. Still, he rejects Trump's idea that his administration could bring back those jobs by renegotiating or withdrawing from NAFTA.

"Just undoing that agreement is going to create new dislocations elsewhere," he says, "like in all the auto supply chains" that now cross NAFTA borders.

Rodrik says he thinks the economics profession is learning from its mistakes, including its pre-Great Recession celebration of a free flow of capital around the world. As finicky investors move in and out of markets, sometimes overwhelming and destabilizing economies, it's clear, he says, that "financial globalization is no bowl of cherries."

"Things change when the evidence comes in," Rodrik says. "Economics is a discipline that's quite capable of changing track. It just doesn't happen very quickly."