Americans are spending more freely as confidence in the economy has jumped in the past year and the unemployment rate is at a 17-year low. 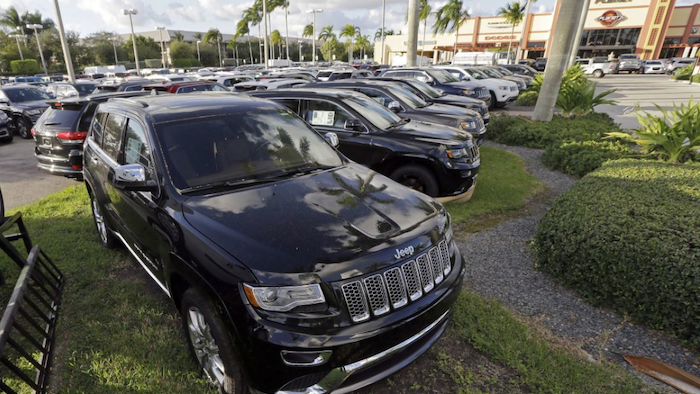 Retail sales increased 0.2 percent in October, the Commerce Department said Wednesday, after a healthy 1.9 percent gain in the previous month. September's gain was the largest in 2 ½ years and was driven by big increases in auto and gas sales in the wake of Hurricanes Harvey and Irma.

Americans are spending more freely as confidence in the economy has jumped in the past year and the unemployment rate is at a 17-year low. Excluding gas station sales, which fell sharply as prices dropped, retail sales rose 0.4 percent last month.

Americans are boosting their spending, but incomes are rising only modestly. That has pushed more people to borrow to finance their purchases, particularly of autos. That has renewed worried about whether U.S. households can stay on top of their burgeoning debt loads.

Auto loans and credit card debt rose sharply in the July-September quarter, according to a report Tuesday by the Federal Reserve Bank of New York. That pushed total household debt to a record high of nearly $13 trillion.

The proportion of Americans falling behind on their credit card bills rose to 4.6 percent, the New York Fed said, up from 4.4 percent a year earlier. The share of auto loans that are 90 days or more overdue rose to 2.4 percent from 2.3 percent. Still, low interest rates mean that U.S. households' debt payments, on average, aren't historically high.

Gas station sales fell 1.2 percent last month, the retail sales report showed, mostly because prices nationwide dropped 2.4 percent. That is a reversal from September, when gas prices spiked 13 percent in the wake of the hurricanes, which disrupted refineries on the Gulf Coast.

Auto sales rose 0.7 percent, a solid gain after a huge jump of 4.6 percent in September. Sales are likely still elevated by the impact of the hurricanes, which destroyed thousands of cars in Texas and Florida that are steadily being replaced.