Pound Dives As UK Plunges Into New Period Of Uncertainty

The British currency lost as much as 3 cents against the dollar after Prime Minister Theresa May failed to gain a stronger majority for Brexit talks. 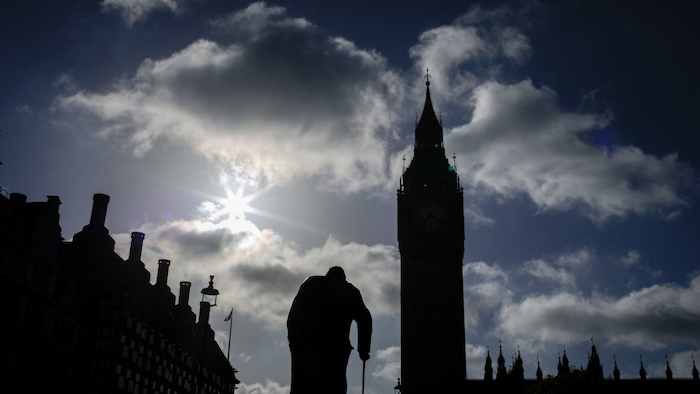 The pound fell sharply after Britain's election saw the Conservatives lose their majority in parliament, raising questions about the next government's ability to lead the talks to leave the European Union.

The British currency lost as much as 3 cents against the dollar by Friday as the results confirmed exit poll predictions that Prime Minister Theresa May had failed in her gambit to gain a stronger majority for those Brexit talks.

Above all, investors are worried about the general uncertainty surrounding the country — whether a bruised May will be able to govern effectively or whether she may eventually resign. On Friday, she said she will try to form a minority government with the support of a small Northern Ireland party,

"The big picture is that political uncertainty could take weeks or months to be resolved and it is likely to weigh on both financial markets (in particular the pound) and the economy," said Paul Hollingsworth, economist at Capital Economics in London.

As the dust settles, one issue will become the focus for investors: whether Britain is more or less likely to retain privileged access to the EU's single market. Exports of goods and services account for about 27 percent of the British economy, with almost half of exports going to the EU.

The probability of a clean divorce from the EU, a so-called "hard Brexit," can play out in different ways.

On the one hand, a weakened Conservative prime minister might not have the power to resist calls from some within the party who want that clean break, even if that means losing privileged access to the EU single market.

When May called the election in April, she did so with the Conservatives riding high in the polls, and the pound had surged on expectations that a big majority for the Conservatives would allow her to face down the so-called euroskeptics in her parliamentary ranks.

On the other hand, the vote's outcome may in fact suggest a "hard Brexit" is less likely, which could push the pound back up in the longer term.

The strong showing by the Labour Party, which has advocated for closer ties with the EU single market, is an indication the British are wary of breaking away sharply from the bloc. It will be more difficult for a Conservative government to walk away from the EU without a trade deal, as May has threatened to do.

The drop in the pound could push up inflation further in Britain, eroding people's living standards. It would make British exports more price competitive around the world — something that was reflected in a rise in shares for major British companies on Friday.

It would also in theory make it cheaper for foreign people and companies to spend and invest in Britain, though analysts say any gains would likely be offset by the chilling effect the general uncertainty will have on business investment.

"This is a serious moment for the U.K. economy," said Carolyn Fairbairn, the head of Britain's biggest business lobby, the CBI. "Politicians must act responsibly, putting the interests of the country first and showing the world that the U.K. remains a safe destination for business."