The administration's letter to congressional leaders starts 90 days of consultations with lawmakers over how to revamp the pact. 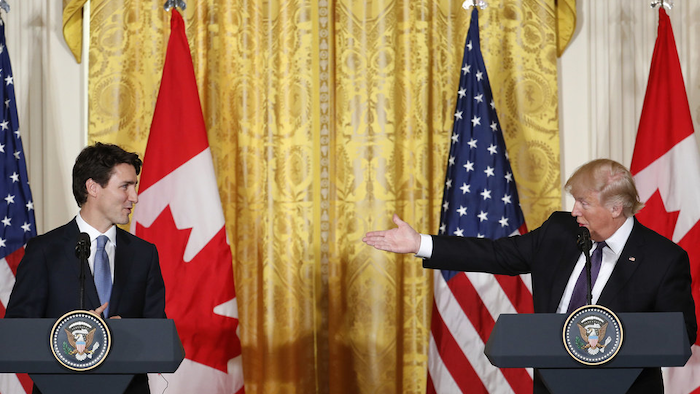 Making good on a campaign promise, the Trump administration formally told Congress Thursday that it intends to renegotiate the North American Free Trade Agreement with Canada and Mexico.

U.S. Trade Rep. Robert Lighthizer sent a letter to congressional leaders Thursday, starting 90 days of consultations with lawmakers over how to revamp the pact. Talks with Canada and Mexico can begin after that.

The two-page letter offered few details about what changes the administration would seek in the 23-year-old pact that President Donald Trump has called "a disaster." Lighthizer told reporters that any new deal should do a better job of protecting U.S. factory workers and should be updated to reflect new technologies.

Last month, White House aides spread word that Trump was ready to pull out of NAFTA. Within hours, the president reversed course and said that he'd seek a better deal first.

"We are going to give renegotiation a good strong shot," Lighthizer said. He refused to say whether leaving NAFTA remained an option.

The trade agreement has been a lightning rod for criticism since it was being negotiated in the early 1990s. During the 1992 presidential campaign, independent candidate Ross Perot famously predicted a "giant sucking sound" as NAFTA pulled U.S. factory jobs south of the border into Mexico. Campaigning last year, Trump vowed to renegotiate NAFTA and pull out of it he couldn't get a better deal.

NAFTA took effect in 1994 and triggered a big increase in trade among the three countries. American farmers have mostly benefited from the reduction in trade barriers. But the pact did encourage American manufacturers to relocate some operations to Mexico to take advantage of cheaper labor there; so critics blame NAFTA for wiping out U.S. factory jobs.

"Since the signing of NAFTA, we have seen our manufacturing industry decimated, factories shuttered, and countless workers left jobless," Commerce Secretary Wilbur Ross said in a statement. "President Trump is going to change that."

In March, the administration circulated an eight-page draft letter on NAFTA that disappointed critics by appearing to keep much of the existing trade agreement in place.

Thursday's letter had fewer specifics. Lori Wallach, director of Public Citizen's Global Trade Watch, called it "markedly vague." House Democratic leader Nancy Pelosi complained that "the president's vague NAFTA letter is a stark contrast with the aggressive promises he made to hard-working families during the campaign."

But Republican congressional leaders promised to work with the administration to craft a better deal.

"We look forward to working with the administration to strengthen the agreement in a seamless way and ensure that we retain the current benefits for American workers, farmers and businesses," said Texas Republican Rep. Kevin Brady, chairman of the House Ways and Means Committee.

Mexico and Canada signaled that they welcomed the opportunity to modernize the agreement.

Gary Hufbauer, senior fellow at the Peterson Institute, said the United States could seek modest "technocratic" changes, including provisions to update NAFTA to reflect technologies that have emerged since the original agreement was negotiated. Or it could take a more aggressive approach, putting pressure on Mexico to reduce the trade gap, perhaps by dropping a value-added tax Mexico slaps on goods coming across the border.

Thomas Donohue, president of the U.S. Chamber of Commerce, urged the administration to reach a deal quickly. Political pressures in 2018 — a presidential election in Mexico and congressional elections in the United States — could make it harder to seal an agreement next year.

Kansas City Southern has been holding talks with two Canadian suitors since last month.
May 14th, 2021