Consumers Behind Accelerated Shift To Cage-Free Eggs In US

This shift is a large-scale example of agribusiness adapting to growing sensitivities about how their food is treated. 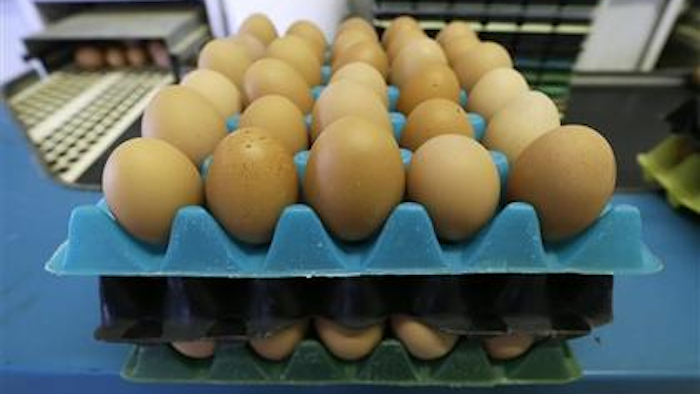 Alert and curious, hundreds of hens with bright red crowns and faces strolled out of a large chicken house midmorning into the fresh air and a fenced pasture amid rolling fields of alfalfa, clover, corn and soybeans. They cluck and coo, peck and scratch at the ground.

"They're obviously much more comfortable without cages," Iowa organic farmer Francis Blake said of his flock of 5,000 hens, which live a cage-free life.

This existence, by all appearances a chicken nirvana, is what animal rights groups have sought for years and increasingly what consumers want. Already, large chains like McDonald's, Starbucks, Costco, and, most recently, Panera Bread have begun requiring suppliers to go cage-free over the next decade.

The $10 billion egg industry in care of 270 million hens that lay eggs for food is in the process of figuring out how to overhaul a deeply entrenched, profitable model of raising chickens in cages smaller than an 8 ½-by-11-inch sheet of paper, despite decades of successful growth. Yet, it's not completely clear what's best for the chickens themselves — animals that, when uncaged but still cooped up, can be aggressive and sometimes prone to cannibalism or injuring themselves.

It's one of the largest-scale examples of agribusiness adapting to consumers' growing sensitivities and anxieties over how their food is treated before it is on their plates and in their stomachs, following other modifications like the dairy industry ending the practice of removing calves' and cows' tails and some states banning restrictive gestation crates for female pigs.

"The change is humongous," said Marcus Rust, CEO of Rose Acre Farms, the nation's second-largest egg producer that's building all of its new barns to be cage-free. "When it comes to pure perception you're never going to convince the general public that we shouldn't treat our chickens the same way they treat their pets."

Cage-free doesn't always equate to problem-free living for chickens, research has shown, and it doesn't mean free-range. In contrast with federal organic regulations that say cage-free chickens must have outdoor access, commercial cage-free operations keep thousands of hens inside a barn with no outdoor access, which can lead to a death match when chickens try to fly and smash into either one another or barn fixtures. Plus, farmers get up to 10 percent fewer eggs and significantly higher production costs when the hens are freed of the cages.

No matter, the top U.S. egg suppliers — Rose Acre Farms, Mississippi-based Cal-Maine Foods and Iowa-based Rembrandt Foods — are gradually moving to cage-free equipment over the next decade or so, replacing equipment as it wears out or building new barns.

The official egg industry position is that a variety of chicken-housing systems will be used so that consumers have choice of the type of eggs they want to buy, be it cage-free and organic eggs that can cost around $4 a dozen or a dozen caged eggs for about $2.

But with food giants like Nestle and McDonald's, which serves more than 2 billion eggs a year, committing to full or increased cage-free usage and consumers increasingly buying eggs that come from chickens who've had a taste of liberty, millions more birds are being turned loose. As of October, nearly 24 million egg-laying hens were free of cages, twice the number in 2009.

Earlier this year, researchers at her university published a side-by-side comparison study of different housing systems. They found cage-free barns lost 13 percent of the hens, while caged systems had a 5 percent mortality rate. More chickens suffer from fractured breast bones when attempting to fly inside barns, and cannibalism increases among some breeds in crowded cage-free hen houses, Mench said.

The study also noted that cage-free chickens also produced between 5 percent and 10 percent fewer eggs and that farmers' operating costs were 23 percent higher.

"My concern right now is how we deal with the problems we have with cage-free systems," she said, adding that research needs to needs to focus on redesigning the barns.

Rust's company, based in Indiana, decided a year ago that all of its new barns will be cage-free even though they cost two to three times more to build and are more expensive to operate. The reason: There's still more profit in cage-free eggs because consumers are willing to pay more.

"Farmers were the first capitalists," Rust said. "If they can make more money selling cage-free, free-range or organic that's what they're going to do."