New Zealand, a member of the TPP, released the complete text online. 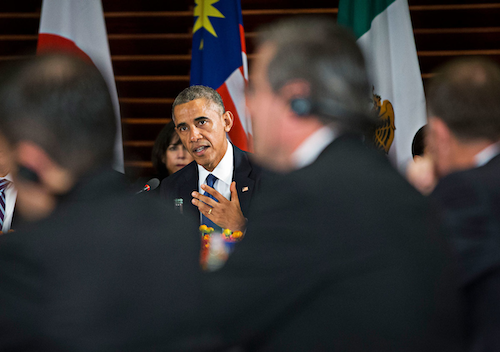 Officials released details of a sweeping Pacific Rim trade deal Thursday, setting the stage for a raucous debate in Congress: Would the pact promote U.S. exports and jobs? Or would it expose more American workers to low-wage competition and give multinational corporations too much power?

New Zealand, a member of the TPP, released the complete text on its foreign ministry website Thursday. The move makes public the details of an agreement that critics complained had been forged in secrecy.

Under a trade law passed earlier this year, President Barack Obama must give the public time to review the text before he signs the agreement and turns it over to Congress for approval. Lawmakers can't nit-pick the deal with amendments; they must simply vote yes or no. Congress is likely to take up the issue next year in the heat of the presidential election campaign.

Obama faces fierce resistance to the deal from within his own Democratic Party. Hillary Rodham Clinton, who is running for the Democratic presidential nomination, has said she's against it. Her opposition may make it harder for Obama to round up votes.

The White House says the deal eliminates more than 18,000 taxes that countries impose on U.S. exports. U.S. officials say the agreement includes strong labor protections, ensuring, for instance, that workers in TPP countries have the right to form unions.

But critics say the agreement will end up forcing American workers to compete with workers in low-wage countries such as Vietnam. They also complain that the agreement goes beyond traditional trade issues such as tariffs and import quotas and includes giveaways to powerful business lobbies.

In response to U.S. pressure, for instance, TPP countries have agreed to give drug companies about eight years of protection from cheaper competitors for biologics — ultra-expensive medicines produced in living cells. It wasn't the 12 years' protection the industry wanted, but critics say it's still enough to drive the price of biologics up and beyond the reach of many people in poor countries.

The deal also allows multinational companies to challenge countries' laws and regulations in private tribunals on the grounds they amount to unfair barriers to trade. Critics say the tribunals give corporations a chance to overturn local laws on public health and the environment.

But the TPP countries say the deal includes safeguards that prevent abusive claims and ensure that governments can continue to issue health, safety and environmental regulations in the public interest. Countries can specifically ban tobacco companies from using the tribunals to challenge health regulations — to the consternation of U.S. lawmakers from tobacco-producing states.