ISM: Manufacturing Continues To Be Positive In Iffy Environment 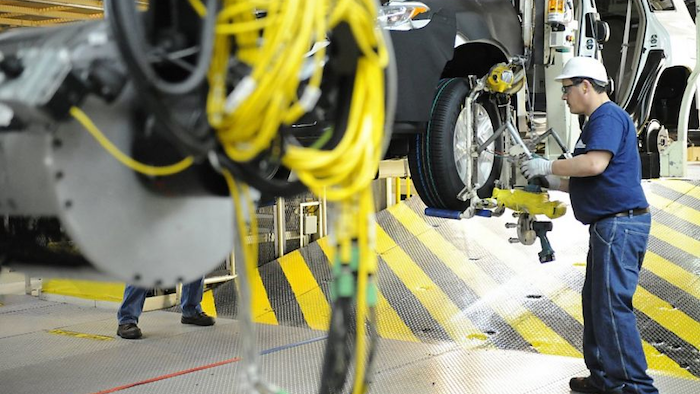 “The Institute for Supply Management (ISM) reports that the October 2015 index was 50.1 percent, down slightly from 50.2 percent in September,” noted Daniel J. Meckstroth, chief economist for the MAPI Foundation, the research affiliate of the Manufacturers Alliance for Productivity and Innovation. “With the dividing line between growth and decline at 50 percent, the reports indicate that manufacturing activity is almost at a standstill, neither rising nor falling. Only 26 percent of the time in the last 25 years has the index been at or less than 50.1 percent, so activity is abnormally weak. The good news in the report is that orders and production are improving."

Bradley J. Holcomb, CPSM, CPSD, chair of the Institute for Supply Management Manufacturing Business Survey Committee states, “The past relationship between the PMI and the overall economy indicates that the average PMI for January through October (52 percent) corresponds to a 2.8 percent increase in real gross domestic product (GDP) on an annualized basis. In addition, if the PMI for October (50.1 percent) is annualized, it corresponds to a 2.2 percent increase in real GDP annually.”

ISM’s New Orders Index registered 52.9 percent in October, an increase of 2.8 percentage points when compared to the September reading of 50.1 percent, indicating growth in new orders for the 35th consecutive month, and at a faster rate relative to September. A New Orders Index above 52.1 percent, over time, is generally consistent with an increase in the Census Bureau’s series on manufacturing orders (in constant 2000 dollars).

ISM’s Production Index registered 52.9 percent in October, which is an increase of 1.1 percentage points when compared to the 51.8 percent reported in September, indicating growth in production for the 38th consecutive month. An index above 51.1 percent, over time, is generally consistent with an increase in the Federal Reserve Board’s Industrial Production figures.

The Inventories Index registered 46.5 percent in October, which is 2 percentage points lower than the September reading of 48.5 percent, indicating raw materials inventories are contracting in October for the fourth consecutive month. An Inventories Index greater than 42.9 percent, over time, is generally consistent with expansion in the Bureau of Economic Analysis (BEA) figures on overall manufacturing inventories (in chained 2000 dollars).

“I believe the inventories numbers are a strategic move by industries as we hit the year end,” explains Holcomb. “Also, with economic uncertainty right now, they don’t want to be holding onto high volumes of inventories.”

ISM’s New Export Orders Index registered 47.5 percent in October, which is 1 percentage point higher than the September reading of 46.5 percent. This is the fifth consecutive month that the survey panel indicated their new export orders decreased.

“Exports are more of the same of the last five months,” says Holcomb. “It’s due to the high cost of the dollar making our exports more expensive overseas and economies like China not being as robust as we expected.”

“The trade indicators in the ISM suggest that imports are falling faster than exports,” Meckstroth explained. “With imports being larger in number than exports (because there is a huge trade deficit), the faster decline in imports suggests an improvement in the trade deficit. It is important to remember that while the oil, food, and metal commodity price collapses will lower the dollar value of the trade deficit, the inflation-adjusted trade deficit, which reflects physical volume, will worsen. Foreign trade will be a major drag on manufacturing activity and the general economy this year and over the next two years.”

The ISM Prices Index registered 39 percent in October, which is 1 percentage point higher than in September, indicating a decrease in raw materials prices for the 12th consecutive month. In October, 9 percent of respondents reported paying higher prices, 31 percent reported paying lower prices, and 60 percent of supply executives reported paying the same prices as in September. A Prices Index above 52.1 percent, over time, is generally consistent with an increase in the Bureau of Labor Statistics (BLS) Producer Price Index for Intermediate Materials.

“The continued low prices are very uncharacteristic and is still due to the price of oil,” adds Holcomb. “This is leading to layoffs and projects being cancelled in the oil and petroleum industry. On the upside, the oil prices make it cheaper to run factories and make products which is leading to higher, healthier profits by the 17 other industries.”