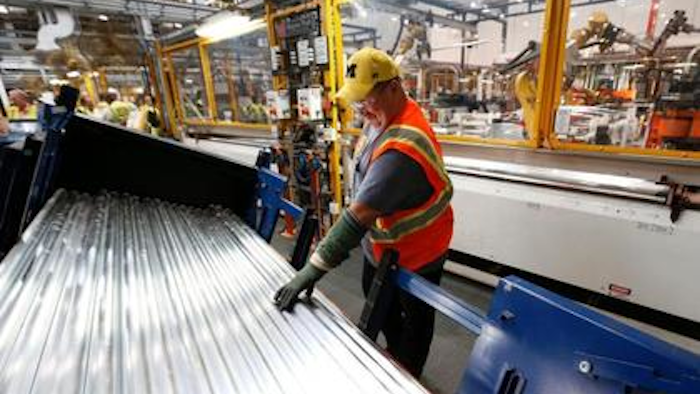 The PwC US third quarter Manufacturing Barometer report showed that large industrial manufacturers expected revenue for the subsequent 12 months to increase by 5.3 percent, up from 4.9 percent in the second quarter poll.

Their optimism about the U.S. economic outlook, however, declined from 69 percent in the previous survey to 60 percent.

Meanwhile, only 23 percent of respondents were optimistic about the global economy, the same percentage as those who were pessimistic and a 15 percent drop from the second quarter poll.

"U.S. industrial manufacturers became increasingly cautious on the outlook for the global environment as they assessed the impact of the slowdown in China and the strengthening dollar," said PwC's Bobby Bono.

Respondents ranked the monetary exchange rate as the top hurdle to growth in the coming 12-month period, with 38 percent expressing concern about the dollar compared to just 14 percent in the third quarter of 2014.

Nearly one-third of participants were concerned about demand levels, while a quarter identified regulatory pressure as an economic headwind.

Top manufacturers were also less likely to hire more workers. In the second quarter, more than half of participating companies expected to add employees over the next year, but only 37 percent expressed that view in the third quarter.

Capital investment, however, remained relatively healthy. The 37 percent of companies planning major new investments was up from the second quarter survey, and investment as a percentage of total sales jumped from 3.3 percent in the previous quarter to 5.6 percent.