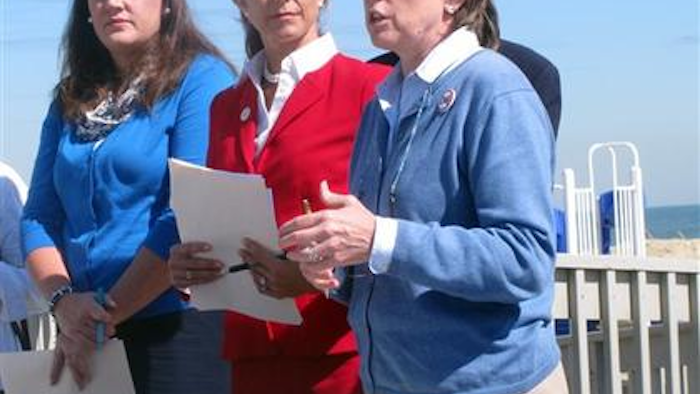 A company that wants to build an ocean terminal off the coast of New York and New Jersey to import liquefied natural gas said Wednesday that a federal review supports its claim the $600 million project is safe and economically necessary.

Roger Whelan, CEO of Liberty Natural Gas, told The Associated Press that the final environmental impact statement from the U.S. Coast Guard bolsters its contention that the project to import natural gas to the New York metropolitan region during peak demand times should go forward.

The environmental review was released Friday, and the plan can be vetoed by the governor of either state. The United States Maritime Administration will make a final decision following public hearings this fall.

Neither New Jersey Gov. Chris Christie nor New York Gov. Andrew Cuomo has expressed his intentions regarding the application for what would be called Port Ambrose. Christie has vetoed a previous iteration of the plan, but both governors declined to discuss the subject last week.

Opponents, including environmentalists, fishing groups, and some elected officials, say an ocean terminal is a potential terrorist target, would disrupt fishing and would harm the environment. They say it's not needed because America already has large supplies of domestically produced natural gas.

Environmentalists planned to approach Cuomo outside a Broadway theater Wednesday night to ask him to veto the project. The governor was to attend a fundraiser at the musical "Hamilton."

The plan was first proposed in 2008, and business and labor groups support it. Liberty wants to build a deep-water port in federal waters 19 miles off Jones Beach, New York, and 29 miles off Long Branch, New Jersey. The company says the ocean terminal will result in lower home-heating prices for the metropolitan region.

The Coast Guard review finds that adverse impacts from the project would be minimal. It also cites the benefits of adding natural gas supplies to the region during periods of peak demand, especially in the winter.

A safety review finds that the project would cause "potentially significant risks" from the handling and transportation of liquefied natural gas. But it determined that the imposition of safety and maritime exclusion zones of between 1,640 feet and 3,280 feet "would minimize the likelihood of adverse impacts."

Whelan said he is optimistic the federal review will convince Cuomo and Christie to allow the project to proceed.

"We're very encouraged that this environmental impact statement is as supportive as it is," he said. "We want people to focus on the facts and the science here. This is the case we make to the public."

He repeated a vow never to use the facility to export natural gas to other countries — something opponents say they suspect might be the ultimate goal of the project.

"We made an absolute promise: We will not apply for any export license, ever," he said. "We have no interest in an export. It can't be, it won't be used for exports, by us or by anyone else."