The EPA's top air regulator declined to specify what the new limit will be. 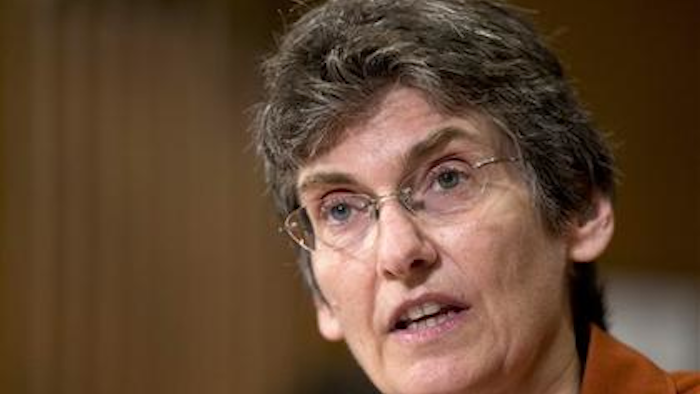 The current federal limit on smog-forming pollution linked to asthma and respiratory illness "is not adequate to protect the public health," a top environmental regulator said Tuesday.

A new ozone standard, combined with greenhouse gas reductions mandated by a rule limiting pollution from coal-fired power plants, "will extend the trajectory of the last 40 years when we've cut air pollution 70 percent — all while our economy has tripled," McCabe said Tuesday at a Senate hearing.

Sen. James Inhofe, R-Okla., chairman of the Senate Environment and Public Works Committee, countered that a new ozone limit would likely have negligible environmental benefits and comes with huge economic costs. Instead of creating a job-killing mandate, the EPA should focus on helping counties across the nation that have not yet met the current standards, he said.

"A new standard at this time is not only irresponsible, but also impractical and economically destructive," Inhofe said.

Facing a court-ordered deadline, the Obama administration is preparing to finalize stricter emissions limits on ozone, a smog-forming pollution linked to asthma and respiratory illness.

Business groups panned the EPA's proposed ozone rules as unnecessary when they were announced last all, calling them the costliest regulation in history and warning they could jeopardize a resurgence in American manufacturing.

The EPA is expected to meet a Thursday court deadline and set a new ozone limit of 70 parts per billion or less in the atmosphere, down from the existing standard of 75.

McCabe, the EPA's top air regulator, declined to specify what the new limit will be, but assured senators that the standard will be based on the law, a thorough review of the science and the recommendations of independent advisers.

Sen. Roger Wicker, R-Miss., said the EPA's plan could be disastrous for his state.

"We've got a regulation coming at states and consumers that is going to absolutely explode the price of power in our state," Wicker said, calling the EPA plan "unworkable."

Paul Billings, senior vice president of the American Lung Association, said EPA should not consider cost but instead focus on protection of the public's health and safety.

Once a standard is set that protects the public, then cost can be factored in, Billings said. The lung association has played a key role in development of ozone standards through a series of legal actions over the past two decades.

"Less smog means better health for all of us," Billings said.

The National Association of Manufacturers is leading opposition to the new rule and argues in TV ads that the current ozone rule works. The ad features a video clip of Obama saying at the White House last month that the U.S. has largely "solved" the smog problem since the days when thick air pollution in Los Angeles and other big cities made it difficult to breathe.

Obama made the comment — recalling his college days in Los Angeles — as he announced unprecedented carbon dioxide limits on coal-fired power plants, the biggest step taken by the U.S. on climate change.

"The president is right," the ad says. "Manufacturers have made significant progress in lowering emissions, leading the nation to a more than 30 percent reduction in ozone levels since 1980."

With air quality the best it's been in decades, "now is not the time for a new ozone rule," said Jay Timmons, the group's president and CEO.

Cutting ozone emissions to 70 parts per billion would cost industry about $3.9 billion in 2025, the EPA estimated, while a stricter limit of 65 would push the cost up to $15 billion. A price tag that high would exceed that of any previous environmental regulation in U.S. history.