President Barack Obama's trade agenda appears to be back on track. 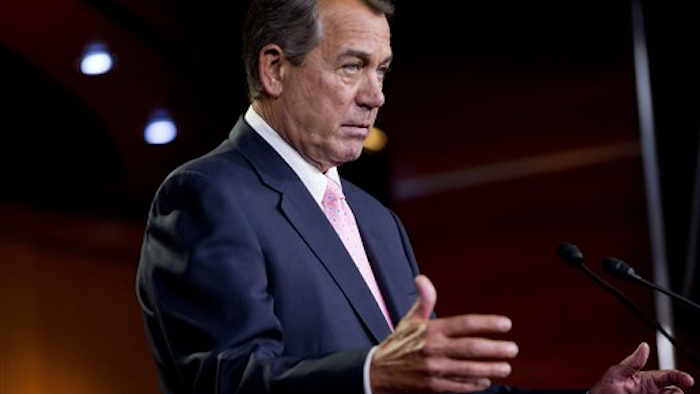 President Barack Obama's trade agenda appears to be back on track after an extraordinary bipartisan rescue operation mounted in the week since it was derailed in the House by rebellious Democrats backed by organized labor.

Working in tandem with the White House, Republican officials arranged for a Thursday vote in the House on a measure to give Obama authority to negotiate global trade deals that Congress can approve or reject, but not change.

Separately, a bill to renew an expiring program of aid for workers who lose their jobs because of imports will move quickly.

"We are committed to ensuring both ... get votes in the House and Senate and are sent to the president for signature," House Speaker John Boehner and Senate Majority Leader Mitch McConnell said in a joint statement issued Wednesday in an attempt to reassure pro-trade Democrats whose votes will be needed.

At the White House, Obama met separately with Democrats lawmakers inclined to support the legislation.

House Democratic Leader Nancy Pelosi had no comment on the day's events. The California Democrat joined the revolt last week in which her party's rank-and-file lawmakers helped vote down the aid package that they customarily support, calculating their actions would prevent the entire trade package from reaching Obama's desk.

Supporters of the president's agenda argue that the United States must stay involved in international trade, in part because otherwise, countries like China will write the rules to their own advantage. The administration's immediate negotiating objective is a round of talks involving 12 Pacific Rim countries, including Japan.

Officials in Congress said Boehner and McConnell hope to have both the trade and the aid legislation to the president by the time lawmakers begin a scheduled vacation at the end of next week.

Obama has not spoken in public in the past two days about the attempt to resurrect his trade bills, nor have White House officials disclosed many details of his role in putting together the rescue attempt. McConnell and Boehner both said on Tuesday that they had spoken with the president on the phone, but they offered little by way of details.

White House spokesman Josh Earnest told reporters at the White House on Wednesday that "The only legislative strategy that the president can support is one that will result in both pieces of legislation arriving at his desk."

Earnest also predicted that all of the 28 pro-trade House Democrats would be willing to follow the rescue strategy, as long as the aid package makes it to the White House after it is separated from the trade measure.

One of the lawmakers, Rep. Gerald Connolly of Virginia, concurred.

"My sense is that there aren't going to be a lot of cracks in the 28 who voted yes last time," he said.

Some congressional Democrats said they wanted the president to sign both bills at the same time.

Earnest didn't pledge that, saying, "There's also this fundamental question ... about whether or not they have to arrive at the same time, on the same day, as part of the same legislative vehicle or separately, that's exactly what's being discussed on Capitol Hill."

Other presidents in recent years have had the same negotiating authority that Obama seeks, known as "fast-track."

Organized labor kept up its attacks.

The Communications Workers of America issued a statement saying that the Republican pledge to pass the aid program "shouldn't pass the laugh test," and accused GOP leaders of breaking other commitments they have made.