From wastewater treatment to farming and advanced manufacturing, a wide swath of the state's economy is particularly sensitive to any changes in water quality or abundance. 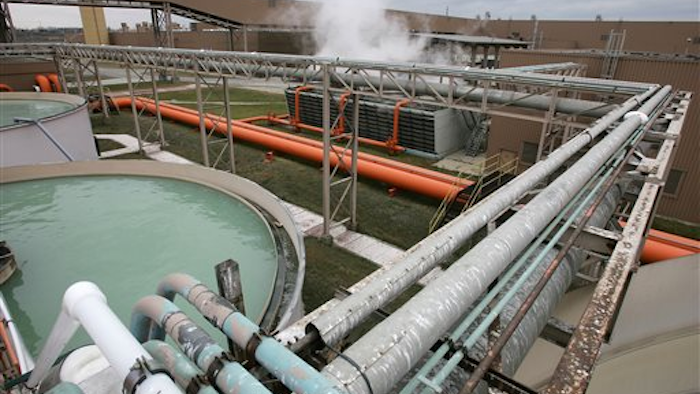 TRAVERSE CITY, Mich. (AP) -- Michigan is fourth in the nation in the share of its workforce associated with industries that develop freshwater technology and services or are highly dependent on plentiful and clean water, according to a report released Thursday.

From wastewater treatment to farming and advanced manufacturing, a wide swath of the state's economy is particularly sensitive to any changes in water quality or abundance, said the analysis prepared on behalf of three public universities that conduct extensive water research.

It also says that those industries and the research provide a solid foundation for developing a "blue economy" advocated by many futurist thinkers as a path to prosperity for the Great Lakes region in the post-Rust Belt era.

The report was produced by Anderson Economic Group, an East Lansing consulting firm that previously has examined the universities' contributions to sectors such as automobiles, information technology and alternative energy. The Associated Press obtained a copy prior to its release during the Detroit Regional Chamber's annual policy conference at Mackinac Island.

It found that 718,704 jobs in Michigan — 21.3 percent of total employment — are with industries that benefit directly from innovation and research that boost water quantity and quality. Bigger states such as California and Texas have more such jobs. But Michigan ranks fourth nationally in the share of its workforce in those industries, trailing Indiana (23.3 percent), Wisconsin (23.2 percent) and Alabama (21.3 percent).

The report divided the industries into two broad categories. "Core water products and services" consists of sectors with the clearest link, as they develop, sell or implement water quality and quantity technology. Examples include water filtration, waste treatment and scientific or engineering consultant services. Michigan has 138,026 of those jobs.

The second category, "water-enabled industries," includes those that use large volumes of water for their products or operations, discharge significant amounts needing processing, or both. While virtually every part of the economy needs water, the industries in this group are most likely to make direct use of the new technology, the report said. Among them are agriculture, electric power generation, shipping and numerous types of manufacturing, from wood products to chemicals, drugs and appliances. Their combined employment totaled 581,028.

Only a few workers in such places might have direct involvement with water, said Alexander Rosaen, who wrote the report.

"But the fact remains that if there's a significant change in availability of water, or they can't get the quality of water they need, it might disrupt their operations or the might even change their location," he said.

Promoting both industry categories is important because they have strong growth potential in an increasingly thirsty world — and they represent parts of Michigan's economy that provide an advantage over competing states, Rosaen said.

The universities' water research and related programs "not only support Michigan's economy and way of life, but position the state as a knowledge wellspring for the world's most precious natural resource," said Lou Anna K. Simon, Michigan State's president.