Frenchman Jean Tirole won the Nobel prize for economics Monday for finding ways to encourage better products and competitive prices in industries dominated by a few companies. Tirole's work is credited with helping shape the deregulation of industries in developed economies... 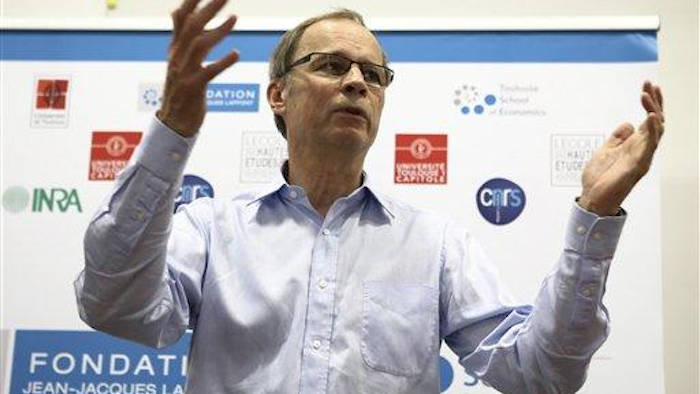 Tirole's work is credited with helping shape the deregulation of industries in developed economies in the 1980s and 1990s. But he has also called for stronger oversight of banks in the wake of the global financial crisis.

"I was incredibly surprised at the honor, and it took me half an hour to recoup" from the Nobel committee's call, Tirole, 61, said in an interview with the website Nobelprize.org

Tirole, who works at the Toulouse School of Economics in France and has a doctorate from Massachusetts Institute of Technology, is the third Frenchman to win the $1.1 million Nobel Memorial Prize in Economic Sciences, which has been dominated by U.S. economists. This is the first year since 1999 that an American has not been one of the winners.

Tirole cannot be easily categorized as pro- or anti-regulation. He agrees with free-market advocates that "because firms know more than regulators, regulation is necessarily going to be imperfect," said Harvard University economist Eric Maskin, who taught Tirole at MIT and who won a Nobel prize himself in 2007. "But that doesn't mean there shouldn't be regulation. You have to be very careful so you don't do more harm than good."

At a news conference Monday, Tirole said: "The market needs a strong state to function normally."

Left unregulated, companies that have few competitors can refuse to innovate and can charge unnecessarily high prices. But attempts to regulate them often fail. Companies grow close to the government agencies that are supposed to supervise them and find ways to use regulations to keep out competitors.

"His contribution is that he has given us a whole toolbox," said Torsten Persson of the prize committee. "More than that, he has given us an instruction manual for what tool to use in what market ... Politicians would be stupid not to take his policy advice."

To reach a home, a potential competitor has to go to the expense of installing its own cable. That limits competition and allows existing telecom providers to charge higher prices.

Tirole is the second French economist to make headlines this year. Thomas Piketty gained fame with a recent best-seller, "Capital in the 21st Century," using 300 years of economic data to argue that the gap between rich and poor will only get worse. The book is based on research he worked on with his countryman Emmanuel Saez.

The economics prize was also the second Nobel award captured by Frenchmen this year, with the literature prize last week going to Patrick Modiano.

"After Patrick Modiano, another Frenchman in the firmament. Congratulations to Jean Tirole. A thumb in the eye for french bashing," French Prime Minister Manuel Valls tweeted.

In prizes awarded last week, Taliban attack survivor Malala Yousafzai, 17, became the youngest Nobel winner ever as she and Kailash Satyarthi of India won the peace prize for fighting for children's rights. Modiano won the literature prize for his lifelong study of the Nazi occupation and its effect on France.

U.S.-British scientist John O'Keefe split the Nobel Prize in medicine with Norwegian couple May-Britt Moser and Edvard Moser for breakthroughs in brain cell research that could pave the way for a better understanding of diseases like Alzheimer's.

The awards will be presented on Dec. 10, the anniversary of prize founder Alfred Nobel's death in 1896.

Even though the economics award is not an original Nobel Prize — it was added in 1968 by Sweden's central bank — it is presented with the others and carries the same prize money.