A Consumer Protection Act lawsuit has been filed against Chiquita Brands International (CQB), alleging unfair and deceptive marketing practices. The lawsuit, filed by Seattle based Water and Sanitation Health (WASH) claims that Chiquita "advertises that its bananas are ..." 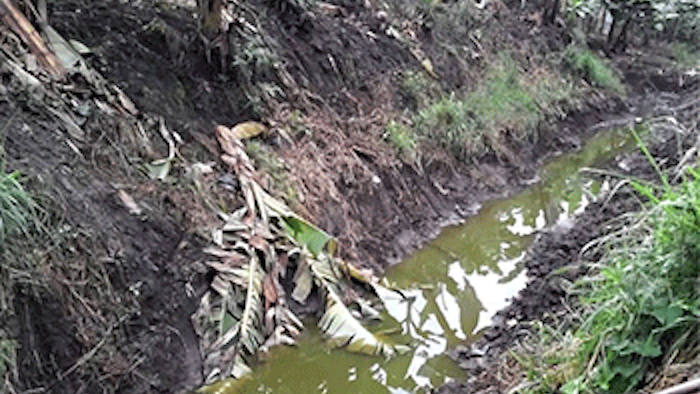 The lawsuit, filed by Seattle based Water and Sanitation Health (WASH) (Federal District Court Case number: 2:14-CV-00010-RAJ) claims that Chiquita "advertises that its bananas are farmed in an ecologically friendly and sustainable manner."

According to Eric John Harrison, founder of Water and Sanitation Health, "That is far from the truth, and bananas sold to U.S. consumers should be marketed truthfully and legally."

"Chiquita sells millions of pounds of bananas that are produced in ways that destroy natural ecosystems and contaminate the drinking water of local communities living next to Chiquita's largest Guatemalan supplier," Harrison claims.  "The pesticides and fungicides used on these Chiquita-contracted plantations are toxic, and the aerial application falls on homes, schools, and residents." (see photos below)

The lawsuit states that drinking and river water near the plantation have become polluted from the use of pesticides, fungicides and fertilizers, and has contaminated the drinking water in six local communities, affecting some 7200 Guatemalan residents.

Since being notified by WASH, the Rainforest Alliance has taken some marketing materials for Chiquita Brands International (NYSE: CQB) off of their site, but Harrison's opinion is that "more must be done to curb Chiquita's deceptive marketing practices."

For example, on one of the Rainforest Alliances' linked Chiquita pages titled "The Chiquita Difference," the text reads "It's only natural that we operate responsibly in the communities where we live and work. That's why our banana farms are Rainforest Alliance Certified™, meaning they meet the rigorous standards of the Sustainable Agriculture Network, a coalition of environmental groups in eight tropical nations."

Harrison said that he believes that the Rainforest Alliance is rethinking their endorsement, but, "as of today, the Rainforest Alliance still gives the impression that Chiquita, one of their largest donors, sells bananas that are grown in a manner that is safe to the environment and to local communities. I doubt the people living in six Guatemalan villages living adjacent to the plantation supplying Chiquita would agree."

The complaint outlines specifics: 420 gallons of various fungicides are spread over one plantation every 8 – 10 days; there are no buffer zones around the plantations to keep the overspray from falling on homes, residents, and schools; the drinking water in adjacent communities contains nitrites and heavy metals at 10-times the recommended levels recommended by the World Health Organization (WHO).