A widening trade deficit contributed to the slowdown in overall economic growth in the fourth quarter and is expected to be a drag on growth in 2015 as the stronger dollar makes American products less competitive on overseas markets. 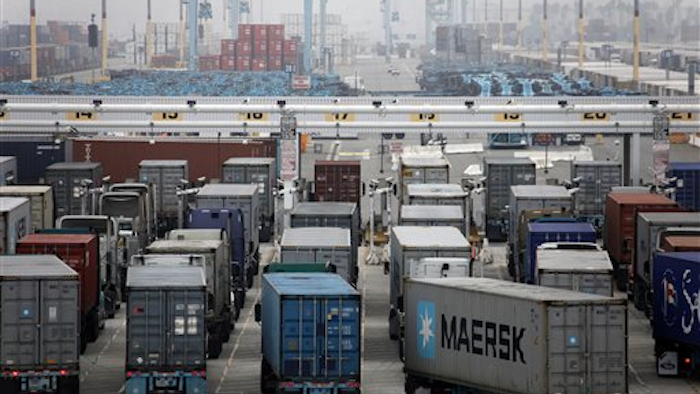 The deficit in the largest measure of U.S. trade widened in the October-December quarter to the biggest imbalance in more than two years as exports of goods fell at a faster pace than imports.

The Commerce Department said Thursday that the deficit in the current account increased to $113.5 billion, an increase of 14.7 percent from a third quarter deficit of $98.9 billion.

For the entire year, the current account deficit rose 2.6 percent to $410.6 billion. It was the largest annual deficit since 2012.

A widening trade deficit contributed to the slowdown in overall economic growth in the fourth quarter and is expected to be a drag on growth in 2015 as the stronger dollar makes American products less competitive on overseas markets.

Paul Ashworth, chief U.S. economist at Capital Economics, said that the current account deficit will likely narrow in the first quarter, reflecting lower prices for imported oil, but then start rising for the rest of this year.

"The stronger dollar and the relative weakness of economic growth outside the United States suggests the deficit will gradually widen" for the rest of 2015, Ashworth said.

The current account is the broadest measure of trade. It covers not only goods and services but also investment flows.

The fourth quarter deficit was the largest since the second quarter of 2012. The latest deficit amounted to a level equal to 2.6 percent of the total economy, up from 2.2 percent in the third quarter.

The rise in the goods deficit reflected a 1.2 percent drop in goods exports to $410.1 billion. The decline was led by drops in exports of U.S. petroleum and autos. Imports of goods were also down but by a smaller 0.1 percent to $595.3 billion. The import decline reflected lower petroleum imports. The drop in exports and imports of petroleum reflected big decreases in energy prices.

A widening trade deficit was a drag on the economy in the final three months of the year, subtracting 1.1 percentage point from growth, helping to slow overall growth, as measured by the gross domestic product to just 2.2 percent, down from growth at a 5 percent rate in the July-September quarter.

Economists say the trade gap will widen further in 2015 as a rising value of the dollar cuts into foreign sales by American producers. The stronger dollar makes U.S. products more expensive in foreign markets.

The overall economy, however, is expected to do better this year as strong employment growth boosts incomes and consumer spending.

On Wednesday, the Federal Reserve kept a key interest rate unchanged near a record low of zero, where it has been for the past six years. However, the Fed modified its policy statement by no longer saying it planned to be "patient" in deciding when to raise interest rates.

But Fed Chair Janet Yellen told reporters that just because the Fed had dropped the word "patient" did not mean the central bank would now become "impatient." The Fed did say it did not expect to raise rates at its next meeting in April but many economists believe the first rate hike could come as early as the Fed's June meeting.