China had long been a major importer of weapons, mainly from Russia and Ukraine, but its soaring economy and the copying of foreign technology has largely reversed the trend. 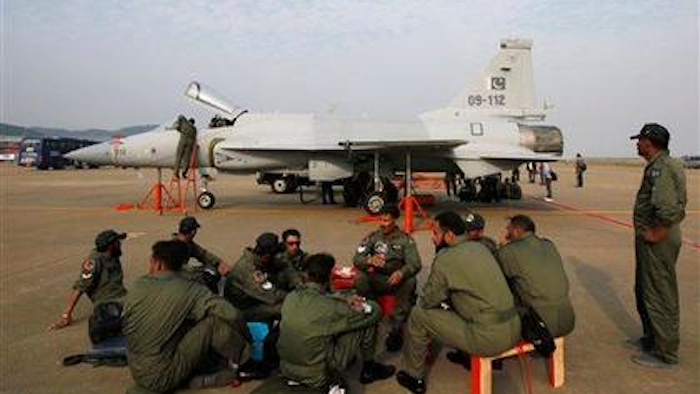 China has overtaken Germany to become the world's third-biggest arms exporter, although its 5 percent of the market remains small compared to the combined 58 percent of exports from the U.S. and Russia, a new study says.

China's share of the global arms market rose 143 percent during the years from 2010-2014, a period during which the total volume of global arms transfers rose by 16 percent over the previous five years, the Stockholm International Peace Research Institute said in a report released Monday.

Its share of the world market was up from 3 percent in the 2009-2014 period, when China was ranked ninth among exporters of warplanes, ships, side arms and other weaponry, said the institute, known as SIPRI.

China had long been a major importer of weapons, mainly from Russia and Ukraine, but its soaring economy and the copying of foreign technology has largely reversed the trend, except for the most cutting-edge designs and sophisticated parts such as aircraft engines.

Chinese sales included those of armored vehicles and transport and trainer aircraft to Venezuela, three frigates to Algeria, anti-ship missiles to Indonesia and unmanned combat aerial vehicles, or drones, to Nigeria, which is battling the Boko Haram insurgency in its north.

China's comparative advantages include its low prices, easy financing and friendliness toward authoritarian governments, said Philip Saunders, director of the Center for the Study of Chinese Military Affairs at the U.S. National Defense University.

Notable successes include a co-production deal with Pakistan to produce the JF-17 fighter, widespread sales of the basic but effective C-802 anti-ship cruise missile, and an agreement to sell the HQ-9 air defense missile system to Turkey that has run into controversy over its incompatibility with NATO weapons systems.

China also has exploited niche markets such as North Korea and Iran that the West won't sell to, emphasizing its attractiveness to impoverished countries and pariah states, said Ian Easton, research fellow at The Project 2049 Institute, an Arlington, Virginia-based Asian security think tank.

Both those U.S. foes appear to have received satellite jamming and cyber warfare capabilities from China, along with technologies to break into private communications and spy on government opponents, Easton said.

"All of these sales should be very disconcerting to American policymakers and military leaders," he said, calling China's rise to the third-place spot among exporters a "disturbing development" that could threaten the security of the U.S. and its allies.

China also offers leading-edge drone technology at competitive prices. One model, known variously as the Yilong, Wing Loong or Pterodactyl, has become especially popular with foreign buyers, although Chinese secrecy surrounding such sales makes it difficult to know how many are in service and where.

Chinese state broadcaster CCTV quoted retired People's Liberation Army Gen. Xu Guangyu saying at an air show two years ago that the unmanned aircraft, which can be armed with two guided missiles, would cost only about $1 million each. That is about 10 to 20 percent of the price of a comparable U.S. model such as the MQ-1 Predator. Rumored buyers include the United Arab Emirates, Uzbekistan and Saudi Arabia.

However, China's incremental growth and the yawning gap with industry leaders America and Russia show the limitations of its aspirations.

The U.S. retained a 31 percent share of the global arms market, exporting to at least 94 recipients, SIPRI said. Countries in Asia and Oceania took 48 percent of U.S. exports, followed by the Middle East with 32 percent and Europe at 11 percent, it said.

Russia was second with a 27 percent global share, 39 percent of which went to India — the world's largest arms importer overall. China took 11 percent of Russia's exports, followed by Algeria.

SIPRI uses a five-year moving average to account for fluctuations in the volume of arms deliveries from year-to-year and doesn't provide monetary values, which are often distorted by governments providing weapons as gifts or at below-market prices.