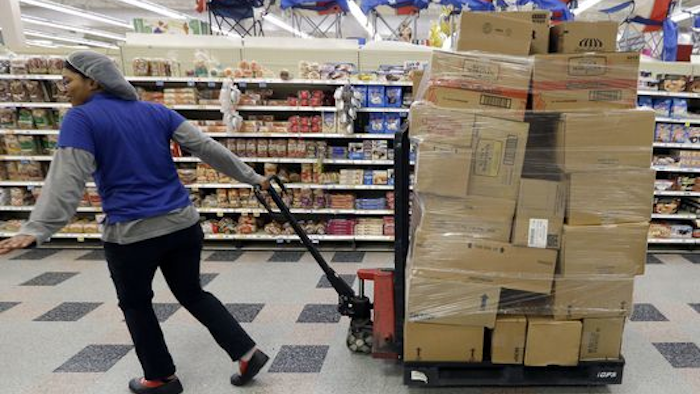 U.S. wholesale businesses increased their stockpiles by a modest amount in January as sales plunged by the largest amount in six years.

Stockpiles held by wholesale businesses rose 0.3 percent in January after no change in December and a 0.8 percent November increase, the Commerce Department reported Tuesday.

Sales dropped 3.1 percent in January following a 0.9 percent December decline. The January decline was the largest setback since sales fell 3.6 percent in March 2009 when the country was mired in the Great Recession. January marked the fourth consecutive month that sales have fallen.

Jesse Hurwitz, an economist at Barclays Research, said that because of a larger-than-expected gain in January inventories, Barclays was revising its tracking estimate for overall growth in the January-March quarter up by 0.1 percentage point to 1.8 percent. But he said a downward revision to December inventories had trimmed the estimate for fourth quarter growth by 0.1 percentage point to 2.1 percent.

Despite the string of declines in sales, economists remain optimistic that sales will rebound in coming months as consumer spending gets a boost from falling gas prices and healthy job gains.

The economy added a solid 295,000 jobs in February, the 12th consecutive month of job gains above 200,000. It's the longest such stretch since 1994-95. The unemployment rate fell to a seven-year low of 5.5 percent but that improvement came primarily from people dropping out of the labor market, an indication that the job market has still not totally healed from deep recession of 2007-2009.

Analysts say that with the strong gains in employment, consumer spending, which accounts for 70 percent of economic activity, should strengthen further in 2015 and this will help propel the economy to growth above 3 percent, the strongest annual growth in a decade.

For the fourth quarter, economic growth slowed to just 2.2 percent, even slower than the government's initial estimate of 2.6 percent growth in the October-December period. Much of the downward revision reflected slower growth in inventories than the government had initially estimated.

Petroleum inventories were down 1.1 percent in January but analysts said this was likely more of a reflection of falling prices than a drop in the volume of petroleum stockpiles.