Relying on Republicans and going against the grain of his own party for his legislative successes has not been much of a go-to play in President Barack Obama's game plan. Then there's international trade. On Thursday, Obama stepped up his campaign for expanding exports and... 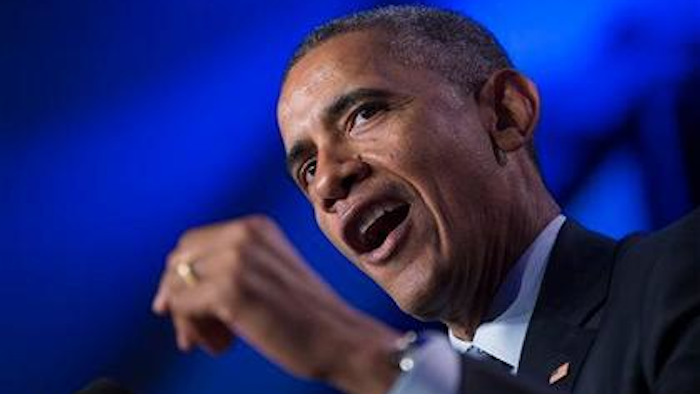 Relying on Republicans and going against the grain of his own party for his legislative successes has not been much of a go-to play in President Barack Obama's game plan.

On Thursday, Obama stepped up his campaign for expanding exports and negotiating new trade deals in Asia and Europe, a rare spot of common ground with Republicans and a raw point of friction with Democrats. Obama pushed his trade themes in interviews with television stations from states represented by the handful of Democratic senators who may be willing to side with the president on his plans for new commerce agreements.

Before cutting those deals, however, Obama wants authority to negotiate trade agreements that Congress can only approve or reject, but not amend. Presidents have had an increasingly tough time getting that authority from Congress; Bill Clinton had to buck his party to win it and George W. Bush got it by a single vote.

But Obama's task may be even tougher.

"He has a harder challenge because the last Democratic president (Clinton) who did this did it in the context of a historic economic boom, a period in which globalization still looked like it had enormous upsides with relatively little downside," said Rob Shapiro, a former senior Commerce Department official and economic adviser to President Clinton.

"The upsides are still there, but the downsides have become more apparent."

Critics, including labor unions, complain past trade deals have sent U.S. manufacturing jobs to countries with cheaper labor, have flooded the U.S. with cheaper imports and not helped U.S. exporters.

The Obama administration on Thursday released data promoting the role of exports in the economic recovery. According to the White House, exports supported about 11.3 million jobs in 2013, an increase of 1.6 million over 2009. While the U.S. posted a record $2.35 trillion in exports in 2014, it also posted a $500 billion trade deficit, higher than 2013 but lower than the $760 billion high recorded in 2006.

For Obama, connecting trade to jobs is a key sales pitch because past trade agreements, such as the North American Free Trade Agreement, have been blamed for job losses and for businesses moving overseas.

The administration is also making the case that a 12-nation Trans-Pacific Partnership agreement that would include Japan, Australia and Vietnam in the deal, also would serve the nation's economic security interests by providing a bulwark against China.

"If we don't, China is going to be writing the rules in the largest market in world," Obama said. "Our businesses and potentially our workers are going to be cut out of the action."

But while Obama has the support of Republican leaders and a majority of Republican lawmakers, he might have to count on Democrats to make up for a conservative wing of the GOP that doesn't support trade deals or simply doesn't want to give Obama negotiating authority.

At the same time, pressure is building on Democrats who have supported past trade pacts to oppose Obama this time.

Among the stations Obama did interviews with on Thursday were TV outlets in Seattle and Portland, Oregon. Sens. Patty Murray and Maria Cantwell of Washington and Sen. Ron Wyden of Oregon are among the Democrats the White House is counting on for support.

Illustrating the challenge, a liberal Democratic group is sending emails to supporters suggesting Wyden could face a primary challenge in the 2016 Oregon Senate race if he remains favorable to trade deals. "A strong primary challenger, with a record of opposing bad trade deals, could help ensure Sen. Wyden stands with Oregonians on the TPP," the email said.

Obama, in his interview with KGW in Portland, made a point of praising Wyden for pushing for tough protections for labor rights and the environment in the Asia deal.

To bolster his case, Obama has asked members of his Cabinet to use their personal relations with Democratic lawmakers to make the case for trade and for fast track authority.

The Senate Finance Committee is working on legislation to give Obama such negotiating power with the aim of having a bill for Obama as early as the end of March, in time for possible Trans Pacific Parternship meeting of foreign trade ministers.