The number of Americans seeking unemployment benefits jumped last week, though it is still at relatively low levels pointing to healthy hiring. Applications rose 25,000 to a seasonally adjusted 304,000, the Labor Department said Thursday. The increase comes two weeks after applications plunged by... 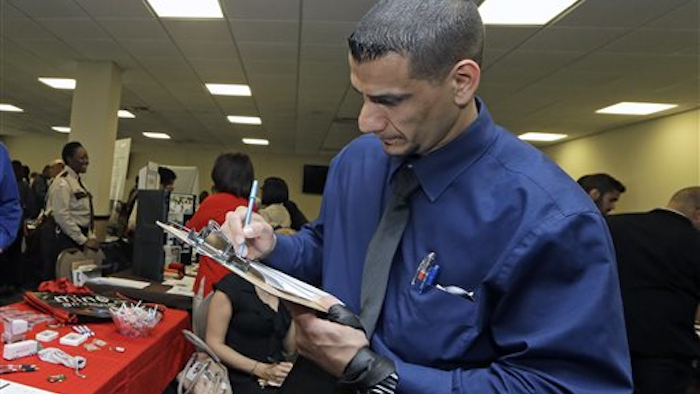 The number of Americans seeking unemployment benefits jumped last week, though it is still at relatively low levels pointing to healthy hiring.

Applications rose 25,000 to a seasonally adjusted 304,000, the Labor Department said Thursday. The increase comes two weeks after applications plunged by 42,000. That drop likely reflected seasonal volatility stemming from the end of the holiday shopping season and the Martin Luther King Jr. holiday, when state unemployment offices were closed.

The four-week average, which calms some of the volatility, fell to 289,750. That is down 14 percent from a year ago.

Weekly applications are a proxy for layoffs. The average has been near or below 300,000 since September, a historically low level that points to strong hiring. Employers have added more than a million jobs in the past three months, the fastest pace in 17 years.

The number of Americans receiving benefits fell 51,000 to 2.35 million, the fewest in six weeks.

More than 3.2 million jobs have been created in the past year. That's helped lower the unemployment rate to 5.7 percent in January from 6.6 percent 12 months earlier.

And average hourly pay rose 0.5 percent last month, the most in six years, the Labor Department said Friday. While economists cautioned against reading too much into one month's figure, it suggested employers may finally feel the need to raise wages to attract new workers and keep the ones they have.