More Americans Are Finally Seeing Something New: A Pay Raise

As the U.S. economy has steadily recovered from the Great Recession, the critical missing piece has been a painful lack of pay raises for many Americans. Their pain may be easing. Friday's jobs report signaled that raises have finally begun to flow through an economy in which, once you factor in inflation, most people earn less than... 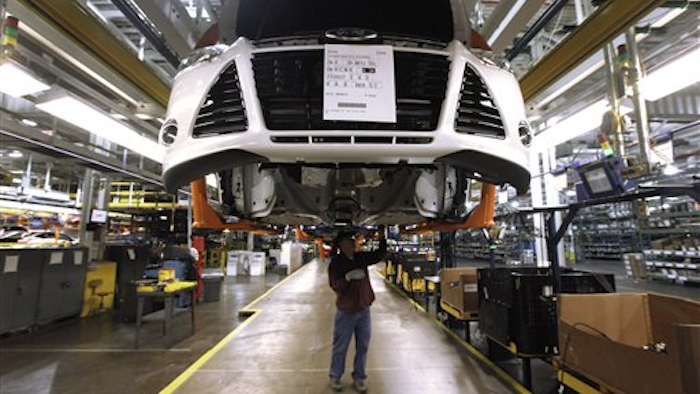 As the U.S. economy has steadily recovered from the Great Recession, the critical missing piece has been a painful lack of pay raises for many Americans.

Their pain may be easing.
Friday's jobs report signaled that raises have finally begun to flow through an economy in which, once you factor in inflation, most people earn less than when the Great Recession struck in 2007.
The average hourly wage jumped 0.5 percent between December and January — the sharpest monthly gain since 2008 — the government's survey of businesses found. The average has now risen 2.2 percent over the past 12 months to $24.75, comfortably above inflation.
So if you've gone without a meaningful raise, should you expect one?
Skeptics still have doubts. But the quickening rate of hiring provides reason to hope.
The government's figures don't pinpoint which occupations have benefited most from rising pay. Wages have risen at a slightly slower pace for non-managers, indicating that bosses are pocketing much of the gains. Still, corporate announcements and job postings indicate that wage growth has been extending to a broad range of industries and professions.
Job listings on Indeed.com, for example, show stronger demand for truckers, health care professionals and technology workers, all of which points to higher wages, said Tara Sinclair, chief economist at Indeed.com and a professor at George Washington University.
"America is really getting back to work, and that's the first step to getting better paychecks," Sinclair said.
The pace of hiring has accelerated 34 percent since 2013. That growth has reduced the number of job seekers and made it harder for employers to find talented employees. The trend, the theory goes, has finally forced companies to loosen their grip on pay to attract and keep the best workers.
Employers have added 3.2 million jobs over the 12 months — including 257,000 in January, 329,000 in December and a sizzling 423,000 in November.
Some economists note that pay figures tend to be volatile from month to month and that January's blowout average increase might be unsustainable. Still, each additional job increases the number of paychecks in the United States, which drives greater consumer spending. And that tends to fuel further hiring and higher wages.
Ford Motor Co. has announced that up to 500 of its lowest-paid factory workers will receive a 48 percent pay raise to $28.50 an hour. Only 20 percent of its employees can be in the lowest tier, so Ford had to raise wages to hire 1,550 workers to make pickup trucks in Missouri and Michigan. Other major companies, including Aetna and the Gap, have also announced pay increases.
Some smaller firms are enjoying a level of growth that has begun to deliver year-end bonuses and raises.
Christopher Falcone is among the beneficiaries. Falcone, 32, has been working as an accountant at a Chicago real estate investment company for the past six months. He said he just received a 3.5 percent salary increase and a 4 percent cash bonus — enough to plan a visit to Disney World to celebrate with his family.
"It's our 10-year wedding anniversary," Falcone said. "We got married there, so we're going back and we're taking our kids."
Other workers are negotiating higher salaries after reviewing the pay levels advertised on job sites.
David Castaneda felt that the 3 percent raise he recently received didn't fully value his performance as a financial analyst at a cemetery and mortuary outside Los Angeles.
So the 27-year-old Castaneda researched other job opportunities and presented the findings to his boss. The result? A 31 percent pay increase to $85,000.
"The opportunities are out there and wages are being pushed up," Castaneda said. "If everyone were to do this, they would get it. But most people are afraid that their boss would say no and let them go."
Many Americans, of course, have yet to enjoy pay bumps regardless of a tightening labor pool. The wage figures from the Labor Department are averages. So even when the averages improve, millions of workers continue to endure stagnant incomes and rising expenses. For example, in the mining and logging sector of the economy, which has been pummeled by plunging oil prices, average wages actually fell in December.
Economists also note that average wages can gyrate from month to month. Wages had dipped in December, leading Dean Baker of the liberal Center for Economic Policy and Research to conclude that there's "no real evidence" of accelerating pay. Wages generally rise at a pace of more than 3 percent in a healthy economy.
Still, the year-over-year average wage increase of 2.2 percent can feel a lot better than it might sound given today's historically low inflation. Thanks to sinking prices at the gasoline pump, consumer prices have edged up just 0.8 percent over the past 12 months. That means wages have risen a solid 1.4 percent after inflation.
"That's a step in the right direction," said Bill Hampel, chief economist at the Credit Union National Association.
Hampel stressed that job growth must continue at the current solid rate for a couple more years to make up for the plunge in incomes that accompanied the recession and then persisted during most of the 5-½-year-old recovery.
Even so, some younger Americans who clung to their jobs during the meager recovery are now enjoying a novel experience: a promotion.
Mark Andre, a designer at the commercial architecture firm LSM in Washington, just received a 15 percent raise after being elevated to a new position.
"It was rough through 2011 and 2012 in the architecture industry," said Andre, 28. "It's encouraging to see the numbers are coming back."
Latest in Supply Chain