Another Month Of Solid Job Growth Is Expected For January

Steady economic growth and consumer spending likely led U.S. employers to hire at a healthy pace in January and extend last year's solid job gains. Economists have forecast that the economy gained 230,000 jobs in January, according to a survey by FactSet. The unemployment rate is expected to stay... 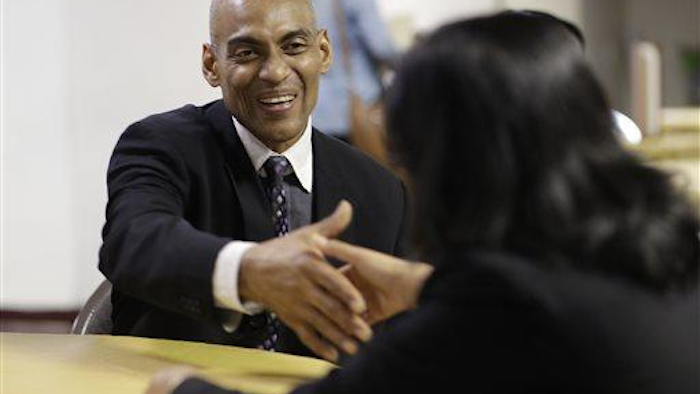 Economists have forecast that the economy gained 230,000 jobs in January, according to a survey by FactSet. The unemployment rate is expected to stay at a six-year low of 5.6 percent.

The January jobs report will be released at 8:30 a.m. Eastern time.

But faster hiring has yet to lift Americans' wages much. Average hourly earnings rose just 1.7 percent in December compared with 12 months earlier. That was barely ahead of the 1.3 percent increase in inflation, according to the Federal Reserve's preferred measure, which excludes the volatile categories of food and gas.

The Fed is closely monitoring wages and other job market data as it considers when to begin raising the short-term interest rate it controls from a record low near zero. The Fed has kept rates at record lows for more than six years to help stimulate growth. Most economists think the central bank will start boosting rates as early as June.

There are now nearly 3 million more Americans earning paychecks than there were a year ago. That additional spending money is lifting consumer spending, which drives about 70 percent of economic growth.

Still, some analysts note that there are reasons to be cautious about the January data. Though surveys of manufacturing and services firms show that they were hiring last month, they were doing so at a slower pace than in previous months.

And the number of people applying for unemployment benefits rose in January after staying at historically low levels since fall. The number of applications typically reflects the pace of layoffs. Applications have since fallen back, suggesting that the increase reflected mainly layoffs of temporary employees who had been hired for the holiday shopping season.

Most economists think steady economic growth has encouraged companies to keep hiring. The economy expanded at a 4.8 percent annual rate during spring and summer, the fastest six-month pace in a decade, before slowing to a still-decent 2.6 percent pace in the final three months of 2014.

More hiring, along with sharply lower gasoline prices, has boosted Americans' confidence and spending power. Consumer confidence jumped in January to its highest level in a decade, according to a survey by the University of Michigan. And Americans increased their spending during the final three months of last year at the fastest pace in nearly nine years.

A more confident, free-spending consumer could lend a spark that's been missing for most of the 5½-year-old economic recovery. Americans have been largely holding the line on spending and trying to shrink their debt loads. Signs that they are poised to spend more have boosted optimism that the economy will expand more than 3 percent this year for the first time in a decade.

One sector that has benefited from consumers' increased willingness to spend has been the auto industry. Auto sales jumped 14 percent in January from the previous year, according to Autodata Corp. Last month was the best January for sales in nine years.

Purchases of autos, appliances and furniture are helping keep factories busy even as weak economies in Asia and Europe and a stronger dollar have dampened demand for U.S. manufactured goods.