Army Says No To More Tanks, But Congress Insists

Built to dominate the enemy in combat, the Army's hulking Abrams tank is proving equally hard to beat in a budget battle. Lawmakers from both parties have devoted nearly half a billion dollars in taxpayer money over the past two years to build improved versions of the 70-ton Abrams. But senior Army officials have said repeatedly, "No thanks." 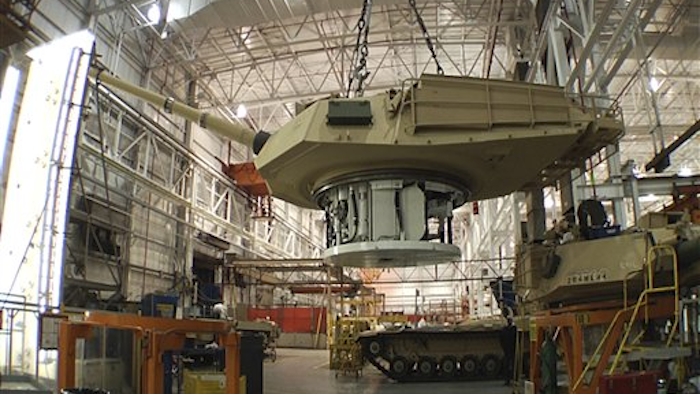 WASHINGTON (AP) -- Built to dominate the enemy in combat, the Army's hulking Abrams tank is proving equally hard to beat in a budget battle.

Lawmakers from both parties have devoted nearly half a billion dollars in taxpayer money over the past two years to build improved versions of the 70-ton Abrams.

But senior Army officials have said repeatedly, "No thanks."

It's the inverse of the federal budget world these days, in which automatic spending cuts are leaving sought-after pet programs struggling or unpaid altogether. Republicans and Democrats for years have fought so bitterly that lawmaking in Washington ground to a near-halt.

Yet in the case of the Abrams tank, there's a bipartisan push to spend an extra $436 million on a weapon the experts explicitly say is not needed.

"If we had our choice, we would use that money in a different way," Gen. Ray Odierno, the Army's chief of staff, told The Associated Press this past week.

Why are the tank dollars still flowing? Politics.

Keeping the Abrams production line rolling protects businesses and good paying jobs in congressional districts where the tank's many suppliers are located.

If there's a home of the Abrams, it's politically important Ohio. The nation's only tank plant is in Lima. So it's no coincidence that the champions for more tanks are Rep. Jim Jordan and Sen. Rob Portman, two of Capitol's Hill most prominent deficit hawks, as well as Democratic Sen. Sherrod Brown. They said their support is rooted in protecting national security, not in pork-barrel politics.

"The one area where we are supposed to spend taxpayer money is in defense of the country," said Jordan, whose district in the northwest part of the state includes the tank plant.

The Abrams dilemma underscores the challenge that Defense Secretary Chuck Hagel faces as he seeks to purge programs that the military considers unnecessary or too expensive in order to ensure there's enough money for essential operations, training and equipment.

Hagel, a former Republican senator from Nebraska, faces a daunting task in persuading members of Congress to eliminate or scale back projects favored by constituents.

Federal budgets are always peppered with money for pet projects. What sets the Abrams example apart is the certainty of the Army's position.

Sean Kennedy, director of research for the nonpartisan Citizens Against Government Waste, said Congress should listen when one of the military services says no to more equipment.

"When an institution as risk averse as the Defense Department says they have enough tanks, we can probably believe them," Kennedy said.

Congressional backers of the Abrams upgrades view the vast network of companies, many of them small businesses, that manufacture the tanks' materials and parts as a critical asset that has to be preserved. The money, they say, is a modest investment that will keep important tooling and manufacturing skills from being lost if the Abrams line were to be shut down.

The Lima plant is a study in how federal dollars affect local communities, which in turn hold tight to the federal dollars. The facility is owned by the federal government but operated by the land systems division of General Dynamics, a major defense contractor that spent close to $11 million last year on lobbying, according to the nonpartisan Center for Responsive Politics.

The plant is Lima's fifth-largest employer with close to 700 employees, down from about 1,100 just a few years ago, according to Mayor David Berger. But the facility is still crucial to the local economy. "All of those jobs and their spending activity in the community and the company's spending probably have about a $100 million impact annually," Berger said.

Jordan, a House conservative leader who has pushed for deep reductions in federal spending, supported the automatic cuts known as the sequester that require $42 billion to be shaved from the Pentagon's budget by the end of September. The military also has to absorb a $487 billion reduction in defense spending over the next 10 years, as required by the Budget Control Act passed in 2011.

Still, said Jordan, it would be a big mistake to stop producing tanks.

The tanks that Congress is requiring the Army to buy aren't brand new. Earlier models are being outfitted with a sophisticated suite of electronics that gives the vehicles better microprocessors, color flat panel displays, a more capable communications system, and other improvements. The upgraded tanks cost about $7.5 million each, according to the Army.

Out of a fleet of nearly 2,400 tanks, roughly two-thirds are the improved versions, which the Army refers to with a moniker that befits their heft: the M1A2SEPv2, and service officials said they have plenty of them. "The Army is on record saying we do not require any additional M1A2s," Davis Welch, deputy director of the Army budget office, said this month.

The tank fleet, on average, is less than 3 years old. The Abrams is named after Gen. Creighton Abrams, one of the top tank commanders during World War II and a former Army chief of staff.

The Army's plan was to stop buying tanks until 2017, when production of a newly designed Abrams would begin. Orders for Abrams tanks from U.S. allies help fill the gap created by the loss of tanks for the Army, according to service officials, but congressional proponents of the program feared there would not be enough international business to keep the Abrams line going.

This pause in tank production for the U.S. would allow the Army to spend its money on research and development work for the new and improved model, said Ashley Givens, a spokeswoman for the Army's Ground Combat Systems office.

The first editions of the Abrams tank were fielded in the early 1980s. Over the decades, the Abrams supply chain has become embedded in communities across the country.

General Dynamics estimated in 2011 that there were more than 560 subcontractors throughout the country involved in the Abrams program and that they employed as many as 18,000 people. More than 40 of the companies are in Pennsylvania, according to Sen. Robert Casey, D-Pa., also a staunch backer of continued tank production.

A letter signed by 173 Democratic and Republican members of the House last year and sent to then-Defense Secretary Leon Panetta demonstrated the depth of bipartisan support for the Abrams program on Capitol Hill. They chided the Obama administration for neglecting the industrial base and proposing to terminate tank production in the United States for the first time since World War II.

Portman, who served as President George W. Bush's budget director before being elected to the Senate, said allowing the line to wither and close would create a financial mess.

"People can't sit around for three years on unemployment insurance and wait for the government to come back," Portman said. "That supply chain is going to be much more costly and much more inefficient to create if you mothball the plant."

Pete Keating, a General Dynamics spokesman, said the money from Congress is allowing for a stable base of production for the Army, which receives about four tanks a month. With the line open, Lima also can fill international orders, bringing more work to Lima and preserving American jobs, he said.

Current foreign customers are Saudi Arabia, which is getting about five tanks a month, and Egypt, which is getting four. Each country pays all of their own costs. That's a "success story during a period of economic pain," Keating said.

Still, far fewer tanks are coming out of the Lima plant than in years past. The drop-off has affected companies such as Verhoff Machine and Welding in Continental, Ohio, which makes seats and other parts for the Abrams. Ed Verhoff, the company's president, said his sales have dropped from $20 million to $7 million over the past two years. He's also had to lay off about 25 skilled employees and he expects to be issuing more pink slips in the future.

"When we start to lose this base of people, what are we going to do? Buy our tanks from China?" Verhoff said.

Steven Grundman, a defense expert at the Atlantic Council in Washington, said the difficulty of reviving defense industrial capabilities tends to be overstated.

"From the fairly insular world in which the defense industry operates, these capabilities seem to be unique and in many cases extraordinarily high art," said Grundman, a former deputy undersecretary of defense for industrial affairs and installations during the Clinton administration. "But in the greater scope of the economy, they tend not to be."